Dunfermline brought their losing run to an end with a confident display at Broadwood, never looking back after going ahead with an early Phinn header. It could have been more had they not tired in the last quarter

Jamie Mole had a slight groin strain, and there was no return for Greg Shields, so David Graham was the only change in the squad that performed the heroics at Pittodrie. Again Jim McIntyre started with a 4-1-4-1 formation - Gallacher between the sticks, a back four of Woods, Wilson, Thomson and McCann, Glass in the holding role, Bell on the right, Phinn and Burke in the middle of the park, Graham on the left, but with licence to get forward to assist Bayne. No sign of Kevin Harper, architect of the win the last time the Pars visited Broadwood, with Ross, Willis, Muirhead, Loy and sub keeper Paterson on the bench. 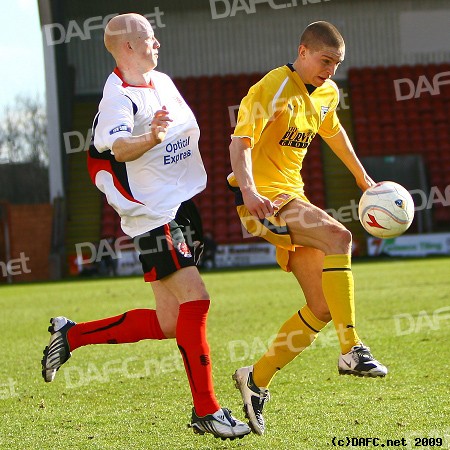 The match was less than 4 minutes old when the Pars took the lead. Thomson played the ball long from the back, picking out McCann in an advanced position on the left touchline. He knocked the ball inside to Graham, and received it back via Glass, in enough space to send in a cross. It was too high for Bayne, but perfect for Nick Phinn who sent a text book header into the far corner. 1-0 Pars, and a chance to test the assertion that all the Pars needed was to get their noses in front.

The Pars continued their fine start, just as they had in their last two league games, playing patient passing football, looking for the ball, giving each other options and generally dominating. Glass had an effort from 30 yards off target in the 7th minute and good work by Bell in the 11th minute teed up Phinn to cross to Bayne, but the centre forward was slighly off-balance, and Cherrie, deputising for the suspended Hutton, made a comfortable save. 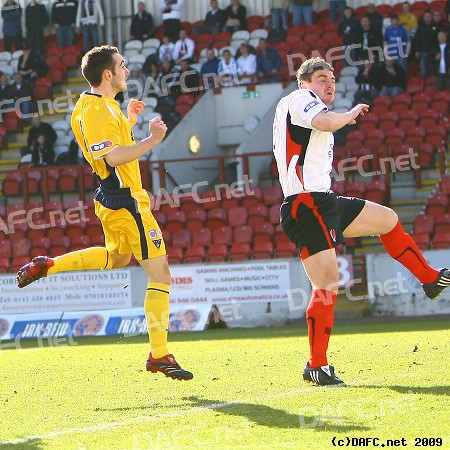 Burke drove past in the 14th minute before another flurry of chances arrived 2 minutes later. Graham’s first touch always gives himself a little space, only this time more space opened up for him as he burst forward before chipping to the back post where Bell’s header was blocked at the expense of a corner. After Phinn had an effort deflected, the second corner was played deep and missed completely by Billy Gibson allowing Glass to try the spectacular volley…which flew miles over the bar and out of the ground.

Burke was showing no reaction to the shift he put in midweek, harrying first Trouten, then Gibson then Brown as the Clyde trio played keep-ball, but there was no need for panic with the Pars in control.

Pars support at the game.

After Bayne had been booked for an off-the-ball incident, the Pars doubled their lead. McCann had been getting forward regularly, but we hadn’t seen so much of Woods in an attacking capacity, until the 37th minute. Just seconds before Burke had had his shot blocked after Bayne and Bell had combined to set up the midfielder with a shooting chance in the box, but the goal wasn’t delayed for long. Glass flicked the ball inside to Burke in the middle of the park, as Calum began his forward run. Burke played it forward and right to Bell, giving,Woods the chance to time his run into the box, receive the ball and bury it in the net from the corner of the 6 yard box. 2-0 Pars.

However, seconds later, the home team pulled one back, from nowhere. Glass was short with a back-pass and although Gallacher was smartly off his line to block at Clarke’s feet, the ball broke to Ruari MacLennan who stuck the ball in the open goal from the edge of the box. 2-1 Pars, and Glass was holding his head in one hand and offering apologies with the other. 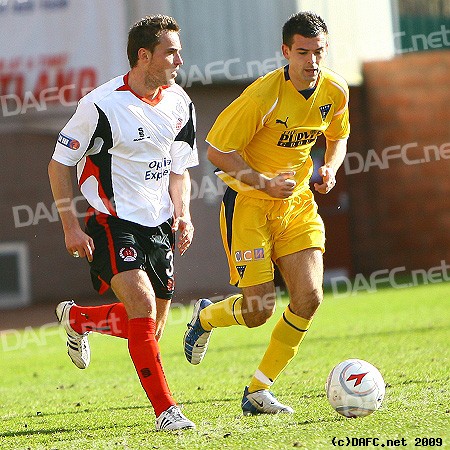 If the Pars were rattled by this they didn’t show it - Bayne had a good chance blocked in 40 minutes, there being too many bodies in the way, and Phinn another effort from distance, before Trouten was booked for chopping Graham. Clyde were awarded a controversial corner two minutes from the break, Bell being adjudged to have touched the ball last, a point Wilson was keen to dispute with referee Scott McDonald. Mr McDonald had the option of awarding a compensatory "foul on the keeper" when Gallacher punched away the second corner (after Nipper had headed the first over the bar) but seemed happy with his original decision. 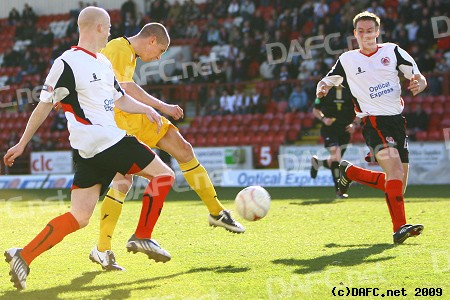 Another left-footed goal from the scouser!

The Pars were quickly into their stride at the start of the second half. Inside 40 seconds Burke had taken a quick free-kick to Phinn whose chip across the face of goal had no takers. Meanwhile, the speedy McKay had replaced Gemmill, Clyde looking to adopt a more adventurous formation, and his pace on the right was looking problematic. The Bully Wee soon had a couple of corners, but from the second one it was the Pars who extended their lead. Gallacher gathered the ball, and hit it long to Bayne. The centre-forward gathered and fed the on-rushing Bell, who in turn found Graham in the box. David could make no progress, so gave it back to Bell, who crossed to the left of the box, Waddell failed to cut it out, and Burke simply passed the ball into the net. 3-1 Pars.