The vastly experienced former Livingston boss was a free agent after not being given a new contract by their new consortium owners. Dunfermline have taken their time to replace Jimmy Calderwood and now see Hay as the man to lead us into Europe next season.

56 year old, 27 times capped Hay has a wealth of football knowledge from a managerial career spanning over three decades. The ex Celtic and Scotland midfielder started his coaching career at Motherwell under Ally MacLeod, before he became manager himself, taking them out of the first division and into the Premier league back in season 1981/82.

His former club, Celtic, came knocking and Hay was a young appointment to replace Billy McNeill as only their sixth manager in their history.

Hay`s Celtic won the 1985 Scottish Cup, beating Dundee United, and also the 1986 Premier League title after Hearts lost their long standing lead on the final day of the season.

Rangers soon started their "Souness era" and Celtic could not compete on or off the park, Hay was replaced by Liam Brady and on his way out of Celtic Park.

With vacancies few and far between in Scotland, Hay moved abroad to Norwegian side Lillestrom.

There he matched his feat at Celtic by winning the league title.

A Scottish vacancy at Love Street gave Hay a return to our game in 1991, but his time there was not a successful one and he left St Mirren just over a year later.

Numerous jobs in the game followed, including scout, agent and assistant general manager during the infamous "Jock Brown" era back at Celtic Park.

Livingston then gave Hay the chance to be involved in front line football once again, when Ray Stewart parted company with the club.

Alongside Jim Leishman, Hay helped Livi complete their rise to the top flight and they finished a remarkable third during their first season in the SPL.

UEFA Cup football was played along at Almondvale, with a high scoring defeat to Sturm Graz finishing off their adventure. 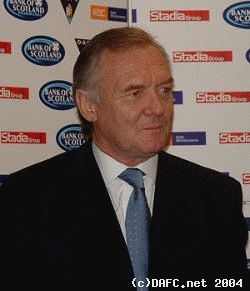 When Jim Leishman returned to DAFC as general manager at the start of season 2003/04, Hay was asked to step upstairs and take on Leishman`s new role at Livi. Brazilian Marcio Maximo was controversially appointed head coach and Hay was removed from the limelight.

Maximo did not last long and Livingston asked Hay to once again help out on the coaching front. Against all odds, and whilst in administration, Hay managed to break the run of Old Firm trophy wins and took Livi to their first ever major trophy triumph, beating Hibs in last seasons CIS League Cup Final.

Davie Hay would appear to have suffered more untimely knocks than most managers, yet he has continually bounced back to succeed elsewhere.

This appointment, in the sorry wake of Jimmy Calderwood`s hasty departure, gives Dunfermline Athletic a fantastic opportunity to build upon what has already been achieved whilst trying to continue to improve under restricted finances.

DAFC.net would like to warmly welcome Davie Hay to Dunfermline Athletic and wish him nothing but the very best in his role as head coach at the club. Alongside Director of Football, Jim Leishman, the two men will be looking to take Dunfermline forward as Scottish Football suffers numerous blows to its already fragile status.

Leishman and Hay have shown that they can work together very well, giving the new set up a head start that would normally take months to achieve. He is the 28th manager of DAFC and the sixth since the departure of Leish in 1990.

Hay will know our existing playing squad extremely well and will hopefully be fully aware of areas that require improvement.

Once again, all the best to Davie Hay as he starts a new era at East End Park. 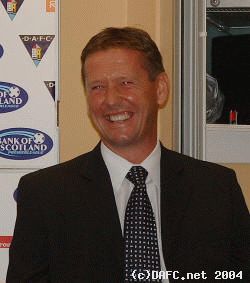