The Pars struggled to create any decent scoring opportunities and in the end Gary Harkins’ first half penalty was the difference between the sides. Dundee were comfortable winners in the end, but seemed overly content to sit on a single goal lead.


They play an eclectic mix of songs at Dens Park - Johnny Cash, the Smiths, Tom Hark, the adapted "Bonnie Dundee" and "Em a Dee ‘til eh deh" of course and then Ken Dodd to round it off. To describe some players as Diddy Men would be unfair, but at the end if it wasn’t quite Tears for the Pars, it was certainly Happiness for the Dees.

Travelling the road and the miles to Dundee on a beautiful September afternoon it didn’t require Derren Brown to predict the Pars team - McDougall came in on the right for the suspended Gibson as the Pars started with their customary 4-4-2: Fleming between the sticks, a back four of Woods, McGregor, Dowie and McCann; McDougall, Burke Bell and Cardle in the middle, Kirk and Bayne in attack. Ross and Higgins joined regulars Phinn, Muirhead and Paterson on a bench that might be handy if you were clinging on to a one nil lead, but wouldn’t inspire if you had to chase the game.

The Dundee boss had promised an attacking line up so it was 4-4-2 from them also (let’s face it, Jocky Scott is never going to play 2-3-5) with recent signings Leigh Griffiths and Gary Harkins catching the eye, but not before the Pars had a couple of half chances from free kicks. An early Lauchlan foul gave the Pars a chance from 25 yards out. Bell played the ball back to Woods, but referee Craig Thomson wasn’t happy and ordered a retake. Plan B was for Burke to have a pop, but his effort was too high.

After Cardle had tumbled easily in the box and failed to impress the referee, Woods got another chance 3 minutes later from a second free kick, but his deflected shot was comfortably dealt with by Bullock, who had retained the No 1 shirt despite Rab Douglas being back in the home squad. 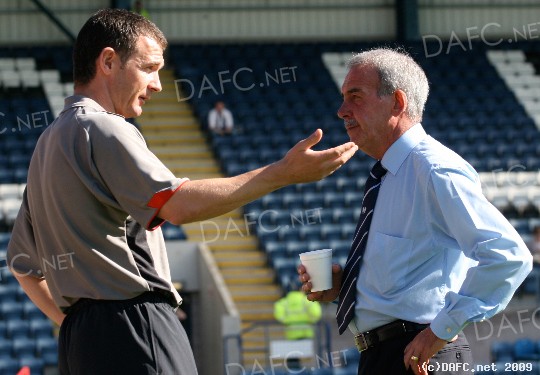 The game was pretty level at this stage and there were chances at either end. Burke had to block Harkins’s shot at the edge of the box after the ex-Thistle man had left 2 Pars for dead, before Bayne took Cardle’s knock back at the edge of the box, but curled his effort past the far post. Dowie was next to the Pars rescue, blocking bravely in his 6 yard box when a free-kick from the middle of the park was slung in deep beyond the far post and Fleming couldn’t intercept Griffith’s cut back, and Kerr’s dangerous 22nd minute clip across goal found no takers.

At least Bell got a couple of efforts on target - a header from Cardle’s right-footed cross, which Bullock was slow to gather (but not too slow) but a minute later the keeper had all the time in the world to stop Bell’s ambitious attempt from 35 yards.

At the other end Paton sold Burke a dummy but again his cross managed to elude everyone in the six yard box, before Cardle was penalised for sitting on the ball as he attempted to shepherd the ball out for a bye-kick.


Dundee were just shading it on points before the key moments of the game happened in quick succession - Burke picked up a loose pass in the middle of the park before setting Kirk free on the right as he advanced into the box. Andy unleashed a cracker, but just over the bar, when he had a bit more time than he perhaps realised and should have found the target. Then at the other end Dundee were awarded a free-kick about 25 yards out. The wall half-stopped the shot, but the ball squeezed through and was chased by McMenamin. Fleming rushed from his goal, stumbled, took a huge divot and bumped into the striker almost simultaneously. Penalty! Which Harkins took, and although Fleming guessed correctly, he couldn’t keep out the shot low to his right. 1-0 Dees and despite a late Cardle effort from 35 yards which was just over the bar, that was it for the first period. 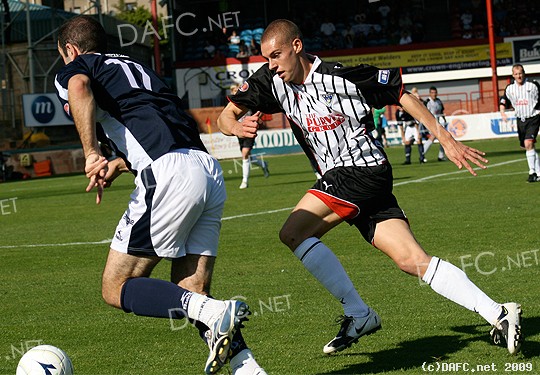 Jim McIntyre made a switch at half-time - Phinn replacing McDougall who had been virtually anonymous in the first 45 minutes and the Pars switched to what looked like a 4-3-1-2, with Cardle in a free role behind the front two. The compressed mid-field was going to need to get width from the full backs, and almost immediately Woods featured up the right. With no options he cut back on to his left before finding Bayne on the right side of the box, but this time it was his cross which evaded meaningful contact, and the chance was gone.