Jim McIntyre’s Pars seem to have stumbled upon the recipe for SPL success – score with your only shot on target, get your goalkeeper to make a brilliant save and do a lot of hard defending. A second successive sound defensive performance laid the foundation for a late smash and grab act as Paul Burns drove home with 5 minutes left to put the Pars 3rd in the table.


The Pars had successfully appealed against John Potter’s red card so he was available for selection but Macca retained faith in the centre-back pairing that had finished at Perth with Andy Dowie starting alongside Keddie. The rest of the backline was as expected, with Jason Thomson and Auzzy McCann as the full backs and McDiarmid hero Gallacher in goals. With Dowie moving back there was a spare slot in the midfield five and in the surprising absence of Steven McDougall from the squad that vacancy was filled by David Graham on the right. This meant Paul Burns would be more central alongside Gary Mason and Martin Hardie would look to get forward to help out Andy Kirk, or get on the end of any of Cardle’s crosses from the left. On the bench there were another couple of changes: Andy Barrowman had recovered from his calf strain so he would surely get a run at some point and as well as the usual youth of Ryan Thomson, Willis and Young, there were Potter, Buchanan and of course Chris Smith.

Dundee United would start with a more offensive 4-4-2, Jon Daly and Johnny Russell providing a combination of height and speed in attack, and Flood, Robertson, Rankin and Douglas the impetus from midfield. 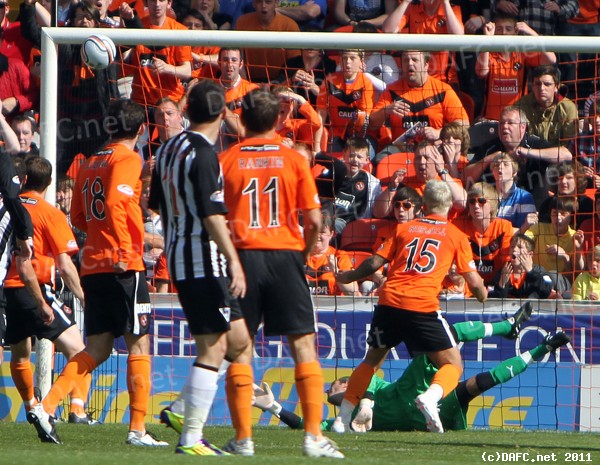 However, in the early stages it was the full backs Dillon and in particular Dixon who caused the biggest threat down the flanks, causing Graham and Cardle no end of bother in tracking back, and forcing the rest of the defence to look lively. But despite their pressure, United only managed to force one early save from Gallacher, a Flood effort from distance that nearly surprised the keeper, although he saved comfortably enough. With their wide players doing more than their fair share of defending the Pars were reduced to long balls aimed for Hardie’s head or balls over the top for Kirk’s feet, although the Pars striker kept jumping the gun to find himself flagged offside. 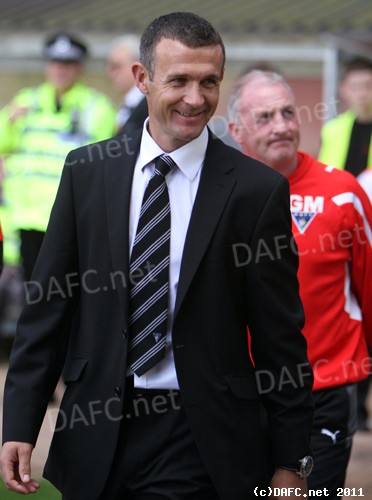 Jim McIntyre back at the ground where he formally played

The Pars did create a chance midway through the half – a throw-in near the corner flag was moved back to Thomson who picked out Hardie’s run with a cross, but the latter’s header was wide. Other than this, the home team were dominant and it took a fabulous save from Gallacher on the half hour to keep the game goalless. Rankin’s run wasn’t picked up and Gallacher had to put the ball out at his near post for a corner. The ball was swung in from the United left, Gallacher punched clear from under his crossbar but Cardle failed to complete the clearance letting Robertson hit the ball on the half volley from the edge o the area. Gallacher saw it late but still got down to his right to deflect the ball onto the woodwork whence it was hacked clear.

The traffic was still one way, Gallacher being rescued by another imaginary foul being adjudged when for the second week in a row he thought he’d prevented a corner only for the assistant to rule against him and the Pars enjoyed a bigger break 3 minutes from the interval when Cardle for once switched off allowing Dillon room to chip to the back post but Rankin glanced his header wide.


It was the same story at the start of the second half with the Pars being on the back foot and struggling to put together any sustained periods of possession. However, United, for all their dominance, failed to create many chances, although Russell should have done better in 48 minutes when he had more space than he knew and hurried his shot wide.

Gallacher was troubled more by corners swung in under his crossbar, most of which he chose to punch, rather than by direct shots, although he was helped immensely by Keddie and Dowie winning the aerial battle and putting in good tackles when required. The full backs too were doing their job, Thomson being alert to nip in ahead of Daly to touch away Dillon’s 55th minute ball to the back stick. Nevertheless, Rankin might have done better just before the hour when Russell caused havoc in the Pars’ penalty area but the ex-Hibee curved his shot past the defence as well as the post. Perhaps he should have squiggled it.


Cardle and Graham were working hard but their problem was that when they did get the ball they had few options. However, they seemed more content to retain possession rather than squander it with a hopeful chip for Kirk or Barrowman who had now come on instead. Mind you, when Cardle did get a rare chance to run at the United rearguard he seemed to trip over his own feet, to the amusement of those in Tangerine.

However, the longer the game went, the more frustrated the home team were becoming at their inability to convert possession into something more tangible, and the more the Pars thought they might nick something. That moment might have come when Kenneth went in studs up 35 yards from goal. There was no question that Martin Hardie was going to take charge, but for once the big mad mental one was off target with the free-kick.