The Pars suffered another narrow loss to a team from Tayside. This time Dundee, experiencing a Jocky Scott bounce, were the victors; their offside tactics frustrating the Pars who hit the woodwork twice.

Despite pre-match injury doubts Jim McIntyre could name the same starting eleven for the fourth game in a row, a rare luxury. Only Simon Wiles had failed to recover from the knock picked up at Airdrie, Greg Ross taking his place on the bench, and so the Pars started with Gallacher in goals, Woods, Shields Wilson and McCann across the back, Harper, Phinn, Glass and Burke in midfield and Kirk and Bayne leading the attack. Dundee were looking to match the Pars 4-4-2 formation, so there was no sign of Jocky Scott’s legendary 4 centre-back approach on his return to East End Park. 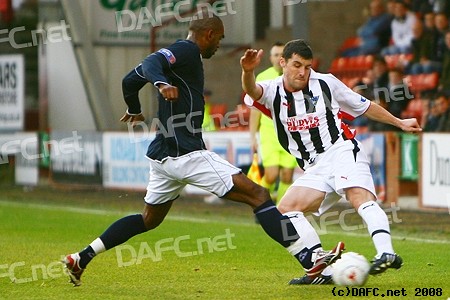 Dundee dominated the opening exchanges, with the home fans only having one of Calum Woods’ now trademark bursts forward, cuts inside and left foot shots in the second minute to get excited about. The visitors nearly took the lead in 10 minutes with a long ball over the top to Deasley. The striker shaped to shoot right-footed but cut onto his left, sending Wilson, who had shadowed his run, onto the deck. However Dinger was still alert enough to stick out a leg and poke the ball away, but only as far as O’Brien at the edge of the box. With a goal seemingly certain, Woods flung himself in the way and blocked the shot - a real let off. 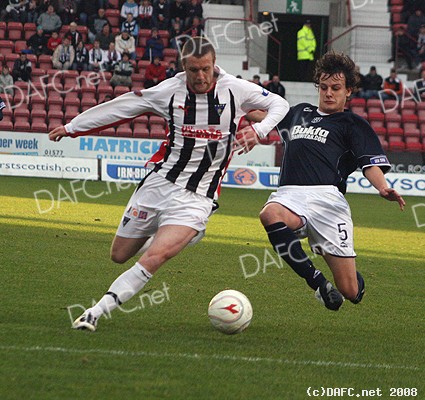 Encouraged by this, the Pars came more into the game winning their first corner in 13 minutes when McCann’s cross was headed behind before Bayne could get on the end of it. Harper was on corner duties this week, not Glass, and his right footed outswinger found Glass at the far edge of the penalty area. Buoyed by breaking his season’s duck midweek, Glass took a touch and curled in a left foot shot which crashed off the cross bar with keeper Douglas beaten.. Two minutes later the Pars had another corner when Woods did well after appearing to knock the ball too far ahead of himself. Again Harper took the kick and again found Glass, who this time took the ball on the volley but the ball flashed well wide. 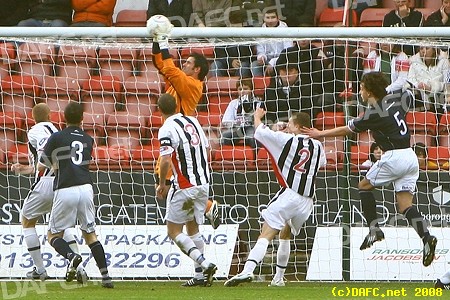 Phinn had had a quiet start but his header in 20 minutes found Bayne whose flick in turn set up Kirk who was hauled down inches outside the box in a central position. Kirk took the kick himself, going for brute force but the defensive wall did its job, the ball cannoning to Woods who let fly from 25 yards but his right foot shot through a crowded area struck the far post.

Midway through the half Glass forced Douglas into a save, but his dipping shot was from too far out to give the former international keeper any trouble.

Calum Woods fires a shot against the post (1of2)

The Dundee back four were operating a high line, and with the stand-side assistant flagging for off-side with some frequency the Pars struggled to create any fluent football, despite alternating attacks down the right wing, with Woods and Harper, and the left wing with Burke and McCann. Two minutes after Wilson had been carded in 35 minutes, a full minute after the original foul, referee O’Reilly having played advantage, Phinn set up Kirk but the striker mistimed his shot badly. There was a late scare with Shields appearing to leave Malone’s cross into the six yard box, before making a late decision to clear. After the first 10 minutes the visitors had rarely threatened and the home side were a little disappointed not to be in front at the break. 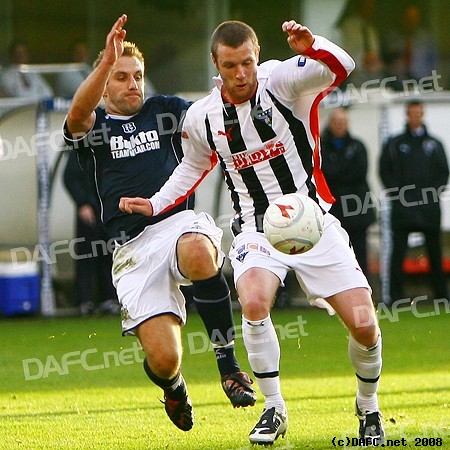 There were no changes at half time, and with the half two minutes old Harper and Malone clashed heads. The ref immediately summoned both physios, and then booked the Dundee full back having taken the view that his challenge had been dangerous.

Dundee again had a decent start to the half with shouts for a penalty in 52 minutes, but the shout was more in hope than expectation. At the other end Douglas was forced to clear a long ball over the top with his head just before the hour mark, and although Burke collected the keeper’s header and skipped past Paton at the second attempt, the match official failed to play advantage and hauled play back, booking the right back. A couple of minutes later there was a potential flashpoint with both Bayne and Benedictus appearing to wrestle when on the ground, a bit like Malone and Woods at Dens Park earlier in the season, but sanity prevailed and both players extricated themselves without the need for disciplinary action.