A new season, a new start, but no improvement to the home results. However, the Pars were applauded from the park at full-time, after dominating for much of the second half. There were encouraging signs, but not enough clear cut goal-scoring opportunities, with the 92nd minute effort from Cox separating the teams.

Calum Woods came in for Greg Ross in the only change to the side that won at Dumbarton; Bell was fit after his ding-dong in Glasgow and retained his place and the line up was predictable: Fleming in goal, Woods, McGregor, Higgins and the skipper Glass along the back, Gibson and Graham on the flanks with Bell and Burke in the middle, and Kirk and Bayne up front.

The Pars started shakily as it soon became clear that this match was for real and they weren’t about to have it their own way as in recent matches. Calum Woods in particular seemed to be a bit hesitant and Fleming struggled to clear a Woods backpass to his weaker foot in the 6th minute before Cox struck the game’s first shot from the edge of the area two minutes later - that finished in approximately row T of the Norrie. Unfortunately Cox was to find his range when it mattered.


In the 10th minute Woods tried one of those ambitious cross-field passes of his to Glass, who couldn’t control on his chest and was robbed by Imrie - the Dunfermline captain’s attempts to limit the damage earned him a yellow card. Graham seemed a bit unfortunate to join him in the book when he appeared to be trying to avoid a late challenge from Proctor, but was booked for diving.


Burke had the Pars first shot in 18 minutes after Gibson had cut inside, but, despite being on his favoured left foot, dragged the ball badly wide. Bell and Graham combined shortly after but both seemed reluctant to shoot, before Kirk had a snapshot which also failed to find the target. 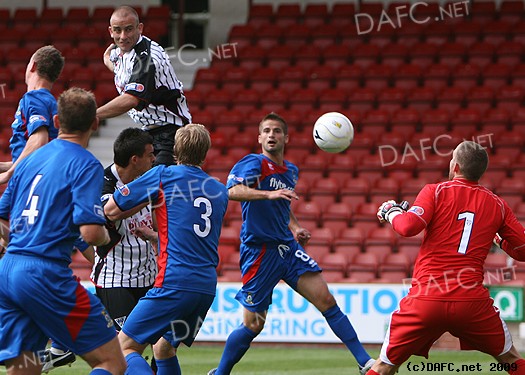 Bayne rises highest to get a header on goal

However Caley Thistle should have taken the lead - first Djebi-Zadi surged forward from the left back position and whipped in a shot that seemed to skiff the outside of the far post before Rooney was through with only the keeper to beat, but under pressure from Woods at the edge of the area he couldn’t find the target.