All the promise of the initial weeks of the season is rapidly fading, as the Pars went down to another defeat, Andreu’s strike midway through the first half proving to be the only goal of the game. The Pars enjoyed the bulk of possession but failed to convert this into chances, let alone goals.


It had been a crazy week for football with English League Cup results proving that the underdog may always have its day, a ball-boy’s antics demonstrating that there is a first time for everything and then the news from Egypt suggesting that football can literally be a matter of life and death, so it was nice to get back to East End Park with the hope of some return to normality, and in particular the prospect of a dull home win.

It’s remarkably easy to forget what the team was after only a fortnight’s weather induced football abstinence, but the conclusion after a few moments’ thought was that there were 5 changes. Falkingham was back in place of the injured Husband, there was the welcome return from Cyprus to starting duties for Sean Byrne instead of Thomson, Cardle was back in instead of Whittle, and with Barrowman and Morris out injured, there were recalls for Kirk and Potter. So not quite the 10 barely fit players and a denuded bench that would apparently have been the story at Cowdnbeath (even allowing for exaggeration) but a threadbare looking squad none the less. On the bench were Whittle, Thomson, Dargo, Kane and Hrivnak.

As for Livi – as well as McNulty and Scougall who had featured at Almondvale, they also named the lively Iain Russell in an attack, the impressive Jesus Garcia Tena at the heart of defence and had Burton O’Brien looking to pull the strings in the middle of the park. 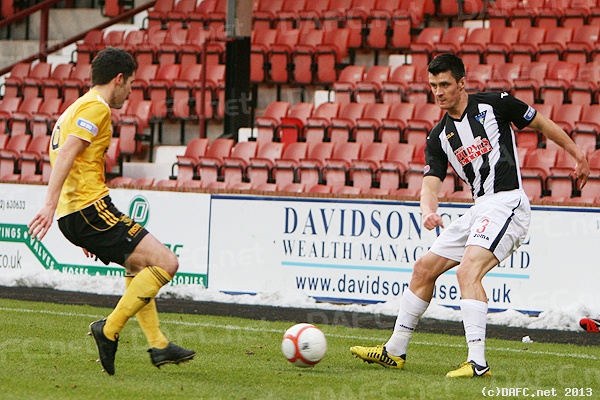 Once again Jordan McMillan won the toss, but this time elected to kick the “right way”, towards the all but empty stand, housing six souls, at the Cowdenbeath end. The Pars made a promising start, with a couple of early half chances – Falkingham turned his man to collect a throw from the right, but his first (and indeed his second) touch let him down as he entered the box and he couldn’t get a shot in. On the other wing, Cardle did get a shot away after cutting inside, but was too hasty and his effort was well wide.

In the fifth minute, the Pars spurned what turned out to be their best chance of the game. Steven Jordan managed first to tackle Russell, then collect the ball at the edge of his box and chip forward to Wallace. Ryan turned well and played a lovely ball to send Cardle clear. Joe had the option of trying to find the unmarked Kirk, but instead went past Barr, fired past the outrushing McNeil, but Garcia Tena was back to head off the line.

Livi hit back with a couple of half chances: Jordan misdjudged the flight of the ball after Falkingham had given away a free-kick, but Dowie was able to block Jacobs’ shot, and in 17 minutes Andreu tried to beat Gallacher at his near post after driving along the bye-line, but the keeper blocked.

Any preview of the match might have discussed how much of the ball Byrne would see, and how vulnerable keeper McNeil would be to the aerial ball. We hadn’t seen too much of Shaun, but he was coming more into the game and in 15 minutes he drove forward and a little shimmy at the edge of the box saw him tripped by Garcia Tena. That resulted in a caution for the Spanish defender, but Jordan couldn’t trouble McNeil from the free-kick. A couple of minutes later, McNeil did flap a little a Jordan cross, but Wallace and Falkingham, in trying to tee it up for each other, managed neither.

The Pars had been on top and so it was a little bit of a surprise when the visitors took the lead midway through the half. Andreu found himself free on the right of the box, and although Jordan blocked his initial shot, Falkingham failed to complete the clearance and McNulty was able to cut along the bye-line and pull back to Andreu to poke the ball home. 1-0 Livi.


Almost immediately Geggan, possibly never fully fit, was replaced by Thomson and to complete a bad five minutes for the Pars, Potter was booked after misplacing a pass then obstructing McNulty when the ball was promptly returned.

The Pars tried to get back, but couldn’t get going. With little movement in front of them, Dowie and Potter, unusually playing at left and right centre-back respectively, were reduced to passing to each other. Thomson, Falkingham and Byrne took it in turns to come back to collect and see if they could do any better but they were equally frustrated as Livi had all the defensive bases covered.


Instead the Pars resorted to ever more hopeful balls – Wallace chased one and caught it by the bye-line in 26 minutes, Kirk knocking the resultant cross back to Byrne, but the youngster’s sidestep to create space for a shot was read. Falkingham also had a decent chance from a corner. He was on the kicks from the quadrants, but his near-post deliveries tended to be poorly executed. He varied things with a short kick to Wallace, took the return, but McNeil beat away his shot at the near-post.

Livi were content to soak up the pressure, and hit on the break, or with the long ball, as in 36 minutes when a punt up the park was very nearly controlled by McNulty as he broke free, but the trailing Dowie managed to retrieve the situation and clear.

With the patient build up not working, Thomson tried to be more direct, but he ran into a brick wall, and McNeil dealt comfortably with a late Jordan cross from the bye-line as the half drew to an insipid end. 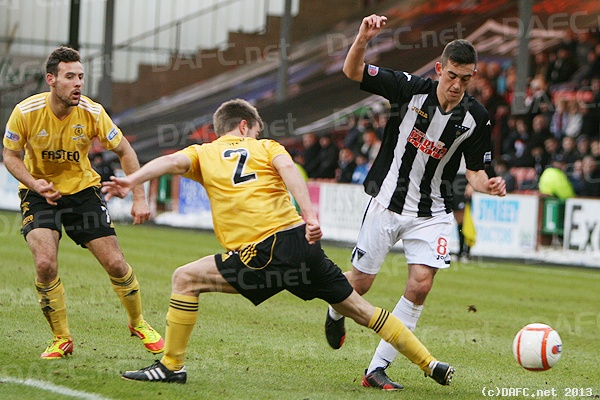 The Pars were late out for the second half, but there was no immediate sign that they had been delayed by any words of wisdom from the management team or discussion of proposed tactical changes, as we were treated to more of the same. The Pars had plenty of possession, but not in the areas where they could cause Livi any problems, and the more they pressed forward the more likely they were to become victim to a sucker punch.

Fox had a chance from almost nothing in 52 minutes, but his cross shot was off target. It was considerably closer than Falkingham’s sliced effort a minute later when Cardle set him up – that went out for a throw.