Dunfermline Athletic 0 - 2 Queen of the South

The big news at East End Park was not that the game was on - the pitch was in fine condition despite the recent downpours - but that Sol Bamba was back from Beijing and in the starting 11, which showed 8 changes from Saturday’s selection. Clearly Jim MacIntyre was determined to use the game to rest senior players and give match experience to those on the fringes. 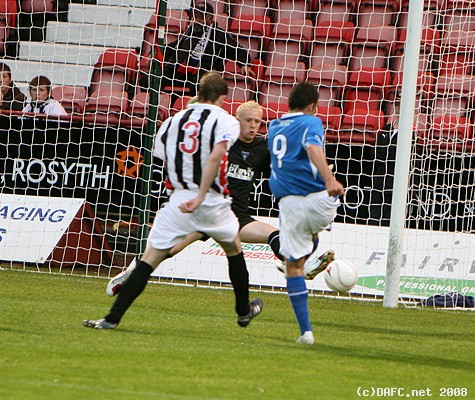 The Pars lined up with Reidford in goals, skipper Shields at right back, Bamba and Thomson in central defence and Scott Muirhead at left back. The midfield saw debutant Ryan Thomson and Nick Phinn in the middle, with Paul Willis on the right and Scott McBride on the left; up front Andy Kirk and Iain Williamson were hoping to add some goals to their tally.

The visitors took an early lead in the 3rd minute as Kean was not picked up at the back post and gave the young Pars keeper no chance from 6 yards. The unfamiliar home line-up seemed to take a while to settle, although Willis’ incisive pass set up what turned out to be the Pars best chance of the half in 11 minutes when McBride blasted a first time effort over the bar, when he had time to take a touch.


Dobbie had a couple of chances to double the lead midway through the half, first miscuing a bicycle kick and then Reidford made a good blocking save after a Tosh flick over the top. In between Williamson had done well to create space for a left foot shot but failed to trouble Bell unduly.

Shortly after Jim Thomson was booked for handball , the Pars had another chance when an miscued Ryan Thomson drive was deflected on target by Willis, but again straight at the keeper.


There was disappointment for Reidford, when he was substituted by Gallacher just before the break, having seemingly tweaked something when clearing a back pass.

The young side had rallied well after a bad start, winning the corner count 5-0 but not the goal count.


Greg Shields did not appear for the second half, with Stuart Dearden making his second appearance in a straight swap, and things looked promising when an immediate good move involving Williamson and Kirk found Muirhead free on the left but Phinn could get no power on his header from the cross. That was to be the highlight of the half, as the Pars began to fall out the game. In 61 minutes the Pars made their 3rd substitution with McCann coming on for Phinn - Muirhead taking his place in the middle of the park as the replacement went to left back.