The Pars season eventually grinds to a halt with a poor home defeat by Ayr United which simply confirmed how inconsistent Jim McIntyre`s team has been all season.

After getting a well earned point away at promotion challengers Ross County last week and playng some of their best football of the season it was back to reality with an inept shot scared performance at East End Park this afternoon. Any slight hope the club had of closing the gap on league leaders Dundee was shown to be complete fantasy.

The Pars let themselves and the fans down badly today with some pretty passing in the early part of the game but took complete stage fright when they got anywhere near the Ayr goal. 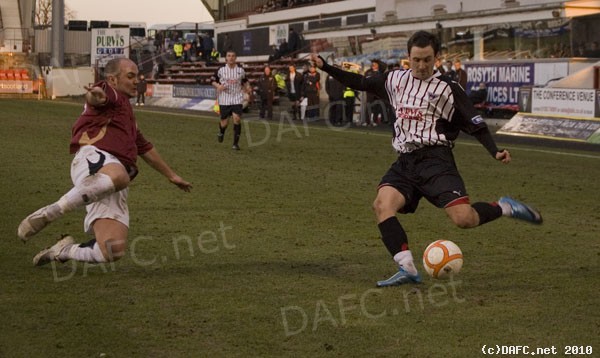 One of the biggest disappointments was Willie Gibson who had remarked pre match that the Ayr boo boys would not put him off. Well they did and it was then the turn of the home fans to criticise the player who has been off form for the past two or three weeks. He barely got past the full back once tending to back track and lay the ball back to Greg Ross. When Gibson did get into a good position to cross his delivery was poor. Not that he was alone, the crosses and corners were appalling today with several players guilty.

The game actually started reasonably well in the opening stages with the Pars knocking the ball around well with Alex Burke the main man in the middle of the park. Unfortunately, Burkey gradually became the only midfield player of note as Bell and Phinn disappeared from the game as the half progressed.

The Pars were playing some nice football with Cardle probing on the left and David Graham running at the Ayr defence whenever he could. But the whole half and, later the game, was epitomised with a good move with the ball worked up the right into Graham running in on goal but he chose to square the ball when it needed him to blast it at goal. Why are the Pars players always looking to walk the ball into the net instead of having the odd crack from distance?

As for Ayr they were brutal and showed absolutely no threat until the 36 minute when former Pars player, Tam McManus, touched a low cross into the net from close range after Ross and Gibson allowed Visconte on the left to get away from the both at the corner area and allowed him to drive in from the left leaving McManus with an easy goal. Jim McIntyre has said before defensive mistakes were killing us and, once again, today he saw another example. It was hardly a deserved lead but a classic example of taking your chances when they come along. Fleming would not be required to make another serious save for the rest of the game. This game was there for the taking by the Pars if they showed a bit more desire and creativity. Half time 0-1.

It was no surprise to see that Gibson was off at half time to be replaced by Ross Campbell making a welcome return to the Pars after brief loan spell last season. In fact, Ayr kept the Pars waiting out on the pitch for good two or three minutes before the visitors returned to the park after half time. No idea what that was all about but as it turns out the Pars had left their enthusiasm in the changing room at half time as the second half proved to be a worse spectacle than the first.

David Graham did manage to hit the post with a snap shot after about 5 minutes of the restart but that was as close as the Pars came to scorng for the rest of the half. There was a real lethargy about their performance in the second half Burke is not the quickest player but he looked jaded, Phinn and Bell were nowhere to be seen and, heaven help us, the ball started getting lumped forward to noone in particular. With the Ayr keeper, Grindlay, happy to waste time from early in the half it also showed the the Ayr team were hardly busting a gut to get forward for a second goal. 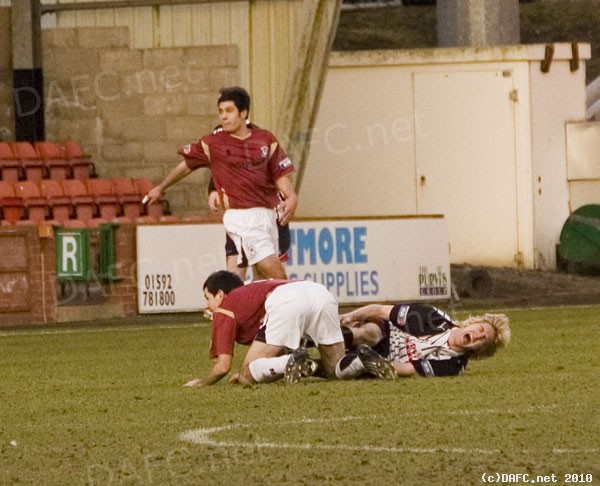 McGregor takes a sore one

The Pars were still winning enough corners but yet again the delivery was inevitably poor. Nicky Phinn got a sore one on the hour mark after a two footed challenge from Aitken. Phinn was replaced by player /manager Jim McIntyre.

Cardle tried several times cutting in from the left looking for a chance to shoot but all too often the road to goal was blocked by defenders.

Joe Cardle was booked for what the referee Calum Murray saw as a dive in the penalty box which seemed harsh as it did look as if there was some contact.

With the small crowd already heading for the exits, thankfully, the game ended as the Pars looked as if they could play all night without scoring. Full time 0-1.