As the biggest crowd of the day in Scotland streamed from the stadium, there were two slide marks clearly visible on the pitch just by the left hand post of the goal in front of the Norrie McCathie stand, witness to the efforts Nick Phinn had made a few minutes earlier to force home the equalising goal. The 9,696 spectators hadn’t witnessed a classic cup tie by any means, but had been given good value, with both sides having periods of ascendancy and the Pars doing well to come from behind.


Jim McIntyre made three changes to the side that started at Cappielow - out went Holmes (injured) Thomson and Kirk (dropped to the bench) and in came Woods at right back, Mole for a first start and there was a recall for Burke on the left side of mid-field, the Pars reverting to their standard 4-4-2 line up, at least for starters. So it was Gallacher in goals, a back four of Woods, Shields, Wilson and McCann; Bell, Phinn, Glass and Burke from right to left across the middle, and Bayne and Mole up front.

It was important not to get off to a bad start, and the Pars settled the better, with the visitors struggling to get over the half way line. When they did, the Pars’ rearguard was happy to concede corners rather than take risks - Calum Woods giving away two corners in quick succession in the eight minute when Aberdeen did venture forward - before the same player slid in to thwart Jamie Smith’s break. 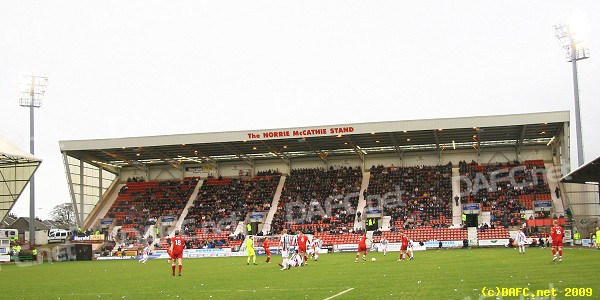 Scott Severin was looking to apply pressure with long throws into the box, given a chance, and the Pars had a couple of dodgy moments trying to defend this threat in 15 minutes before Phinn won the ball in mid-field to set in train a sweeping move which culminated in Mole winning a corner on the left. Glass took it, and picked out the late arrival of Phinn 15 yards out - Nick hit it on the volley - it would have been a sensational goal…but the ball fizzed over the bar and high into the middle of the Dons fans packing the Cowden end. 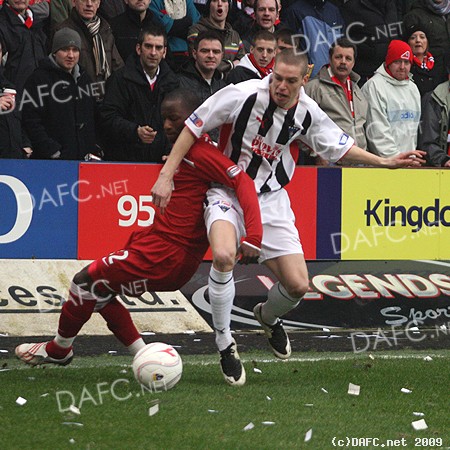 The game was now much more even, Aberdeen trying their luck mostly down their right, where Burke was using his experience to combat this to good effect, and Sone Aluko was proving a handful with his pace and trickery. Again Woods made a saving tackle on the Englishman before play swung to the other end, McCann feeding Mole who whipped in a fine cross which Bayne did well to get on the end of, although his glancing header flashed wide of the right hand post as the Pars fans rose in anticipation of seeing the net bulge. 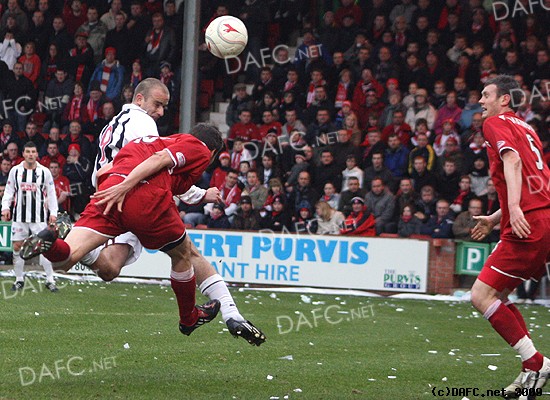 Bayne and Mole were struggling to gel, unsurprisingly given their lack of match time together, but in 33 minutes Bayne’s header found Mole in space20 yards out with the chance to shoot. However the Hearts youngster opted instead to take on Diamond, which cut no ice with the Dons centre-back who easily won possession. 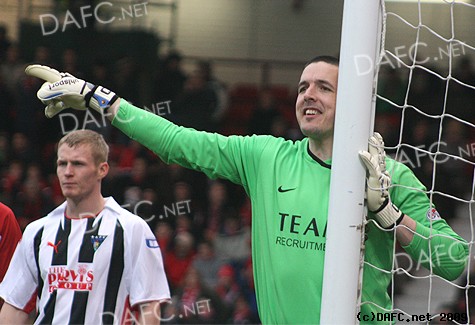 Former Par, Jamie Langfield, in goals for the dons

Aberdeen came much closer 3 minutes later when Scott Wilson blocked Aluko’s effort in his own 6 yard box , the resultant corner finding Severin at the back post and his header back into the mixer caused some minor panic before Aluko blasted wide. The same player caused more bother just before the break, nut-megging Wilson, but finding his progress stopped illegally by Glass, taking a yellow for the team, 29 yards out in a central position. Charlie Mulgrew has had a fair amount of success with free-kicks in his short career and there was some anxiety when he curled his effort over the wall, but Gallacher was equal to it - making a fine save diving to his left to tip the ball over the cross-bar. 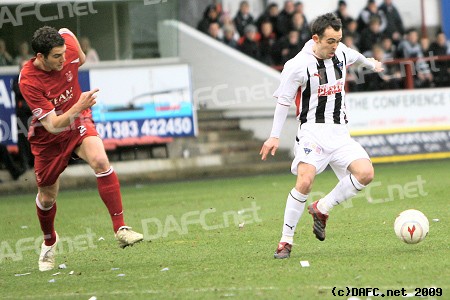 It was all Aberdeen at the start of the second half, with the visitors beginning to show their Premier League credentials with crisp passing and good movement, Smith being particularly prominent. Shields thwarted Aluko in 48 minutes, and Wright seemingly mistimed his jump allowing Gallacher to grab his header in 54 minutes. Meantime Bayne had received his second facial injury of the game and was replaced by Kirk.

The visitors’ pressure finally told just after the hour - Young tempting Woods out of position before feeding Aluko in space on the left with the Englishman finding the corner of the net from 18 yards. 1-0 Dons, and a fine finish from the under 19 international who would like to emulate his big sister by winning a full England cap.