Dunfermline Athletic 1 - 4 Queen of the South

There were three distinct periods to this game: the first half hour belonged to the Pars, although they never looked particularly dangerous; there was 15 minutes of calamitous defending and puzzling refereeing decisions during which the game’s 5 goals were scored and then the second half where Queens were content to concede possession, defend, then hit on the break. Despite all the pretty football around the edge of the box, the Pars couldn’t create many decent chances and ended the game well beaten.


Calum Woods was injured so Greg Ross dropped to right back and Joe Cardle came in to the starting eleven as the Pars more or less retained their midweek 4-2-3-1 formation. Fleming was in goal, Ross, McGregor, Dowie and Muirhead along the back, Burke and Holmes in the middle, Cardle, Phinn and Gibson ahead of them and Bayne on his tod again. Willis appeared on the bench alongside Kirk, Higgins, McCann and Paterson. Queens went with a more orthodox 4-4-2 with emergency loan signing Dennis Wyness partnering Derek Holmes. 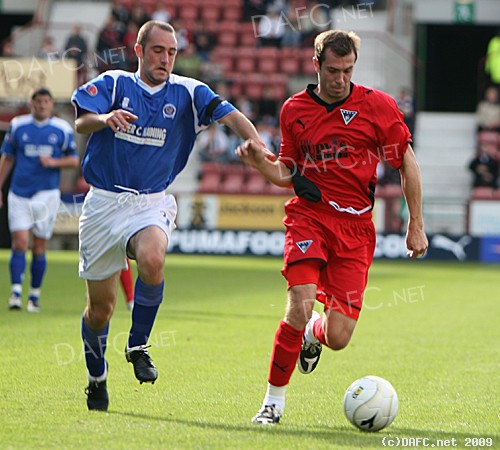 There was a minute’s silence in tribute to ex-FIFA vice-President David Will before the visitors took the kick off, defending the Cowdenbeath end. The Pars had an early chance in the second minute when Cardle played a one-two with Bayne before sending in a right foot shot which Roy spilled, and Phinn elected to stay on his feet under the keeper’s challenge for the loose ball, but couldn’t capitalise.

Both sides were looking to use the long-throws of their left backs to cause problems, and Phinn seemed a bit slow to anticipate the break of one such Muirhead effort in 8 minutes. One difference from Wednesday was that both nominal wide-men were drifting inside much more, if not swapping positions and Gibson popped up on the right in 13 minutes but his chip to the back post was just too deep. The same player was back on the left moments later, skinning McKenna before over-running the ball which broke to Bayne, but his curled effort was well past.

A reasonable start then, but Frank McDermott made his first contentious decision of the game when booking Cardle and Harris for clashing after the ball had gone out for a throw by the dug-out.

Often (until this season) you would see the keeper kick the ball out to allow an injured player treatment - in 20 minutes it was the other way round as Ludovic Roy slipped when dealing with a pass-back. As the ball flew out of the park, the former Livi keeper hurt himself, although he struggled on for another 3 or 4 minutes before being replaced by Hutton. The new keeper was welcomed to the game by a 30 yard effort from Gibson which crashed off the stanchion after the winger had been fed by Holmes. It was by no means all Pars; Quinn had half volleyed an effort over the bar from the edge of the box midway through the half before McLaren’s snapshot from the corner of the box forced Fleming’s first save of the game. Burke had a long range effort blocked after Gibson had created some space but the game was crying out for a goal. Be careful what you wish for - as the half-hour elapsed the madness and mayhem started. 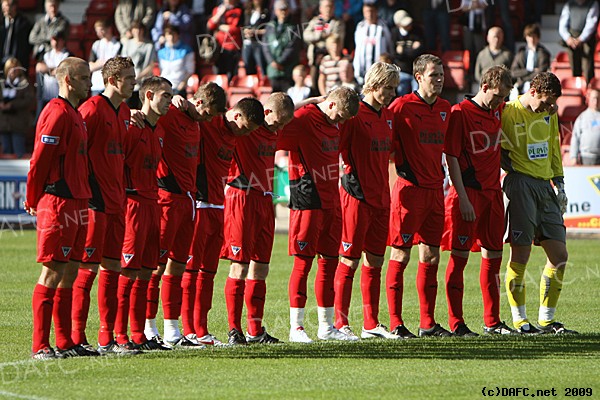 Pars all in red at home

In 33 minutes McGregor, who until now had been content to tap the ball out for a throw in rather than attempt anything riskier, committed another defensive howler. With plenty of time to clear, he delayed, and allowed Wyness first to win the ball just outside the right side of the box, then to proceed into the box unimpeded. Fleming was unable to cover both the near post and the advancing Holmes, and the prolific striker scored with ease. 1-0 Queens, and McGregor punched the post in disgust.

Four minutes later the Pars were level - Cardle had forced a poor clearance and Bayne had the option of letting the ball run out for a throw, but made the better of choice of hitting a first time cross into the middle where Phinn had timed both his run and his jump to score with a header into the bottom corner from 8 yards. One each, and game back on.

Two minutes later and it was game back off again after there was another double-whammy decision - what could have been a goal at one end turned into a goal at the other end. Cardle made a good run into the box and took a tumble under pressure from McAusland - no penalty, but no card either (which would have been red). Down the park came Queens, a poor clearance fell to Burns, and his half volley from 20 yards flew over Fleming and into the far top corner. 2-1 Queens. 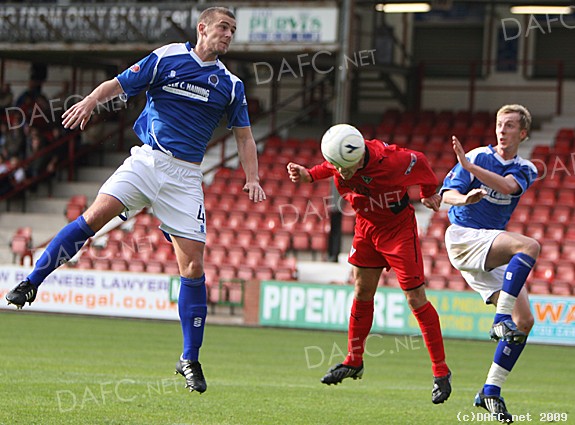 Phinn gets his head to Baynes cross to level the scores

Back came the Pars - Gibson’s shot was palmed away as far as Muirhead whose rasping shot was turned behind for a corner. Burke’s delivery eventually fell to Gibson but a stray leg deflected his latest effort off target. Then the visitors scored again - a simple punt towards the Pars goal wreaked havoc. Burns got beyond the back four at the edge of the box as the ball fell, Fleming came out to punch clear, didn’t get it, Burns did, and was first on the loose ball to ram home from 2 yards despite Muirhead’s despairing slide. 3-1. And soon it was 4, as the game moved into stoppage time. Muirhead’s tackle on Burns was high, this time the referee did point to the spot, and Holmes scored to Fleming’s right. 4-1. Stunned fans didn’t know whether to laugh or cry, and the half ended with some booing the management, some the players, but most the officials.