So the Pars say goodbye to the SPL, at least for now. It was a season that never really got going, right from the moment it kicked off on a Monday evening. For much of the game it looked as if Willis’s first goal in nearly two seasons would result in the Pars finishing on a relative high, but Killie’s second-half domination eventually produced the goods with 2 late strikes.


What a difference a year makes – a year on from the party time at Cappielow and the celebrations against Falkirk, the Pars give up their SPL membership. After false early hope with a couple of backs against the wall wins away from home, the Pars struggled for most of the season with their appalling home form proving a real handicap. The change of manager seemed too little too late, but with a competitor being permitted the advantage of spending £11m on players rather than taxes, there will be many Pars fans happy to see the back of this tawdry, disgraced division.

Manager Jefferies made wholesale changes for this relatively meaningless fixture, without totally going to town. Only 4 players survived from the disappointment of Monday night – full-backs McMillan and Boyle, centre-back Dowie and Mark Kerr in midfield, the last being made captain for the day. Into the team therefore came the following – Bernardo Domínguez Fernández to make his debut in goals, Keddie back from suspension at centre-back, Thomson in midfield, Cardle on the left, Willis on the right and Buchanan up front. Steven McDougall, a virtual ever present last season, started only his second league game of the campaign, his previous outing being way back in the opening fixture. 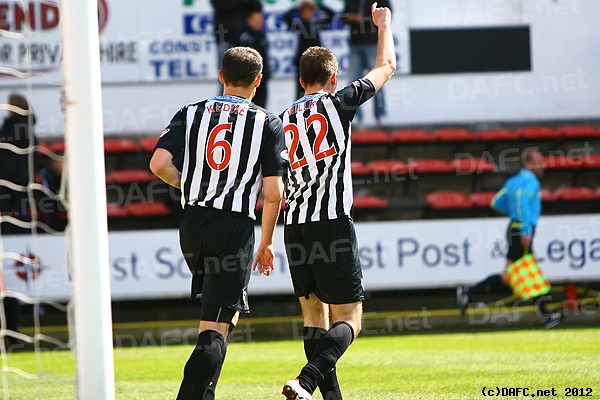 There was plenty of experience on the bench – Hardie, Kirk, Graham, Mason and Smith, as well as the usual youngsters Young and Byrne. No sign therefore of McCann (believed to be injured), Barrowman, Burns or the on-loan Hutton, which may or may not give a clue to JJ’s thoughts as to who to retain for Division 1.

Kenny Shiels had also rung the changes, but not so dramatically – Cammy Bell made way for Kyle Letheren in goals and there were rare starts for youth player Ross Barbour and the Réunionnais William Gros. However, the familiar faces of Harkins and Shiels junior were there, as were Fowler, Kelly and Nelson.

A larger than expected travelling support had turned up, forcing an emergency opening of the East Stand. The Pars kicked off attacking this end but survived pressure early on, Dowie blocking a shot from the edge of the box. There was just the feel of end of season about proceedings – new faces playing themselves in, and Fernández didn’t get a touch until the seventh minute. 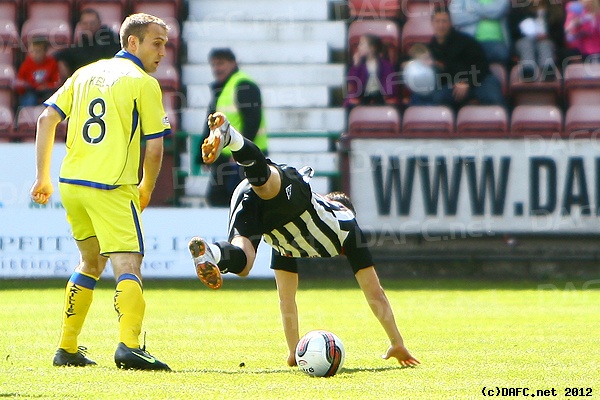 The Pars didn’t show much either, although Kerr’s tackle rebounded for Buchanan to run onto, his first touch being a good one but Toshney got back to put in a saving tackle. The Pars defence, perhaps understandably were less confident - Keddie failed to deal with a ball to his feet in 16 minutes but the Pars got numbers back to crowd out the Killie players before McMillan’s attempted clearance rebounded off an opponent and past his own upright. However, not long after this slight scare, the Pars took the lead. Ryan Thomson had stuck his foot in in midfield, the ball breaking to McDougall just inside the Killie half, but before he could make any headway Shiels hauled him back. Cardle took the free-kick, knocking it long to the back post where Buchanan escaped his man, heading across goal to allow Willis to bundle the ball home at the opposite post. 1-0 Pars. 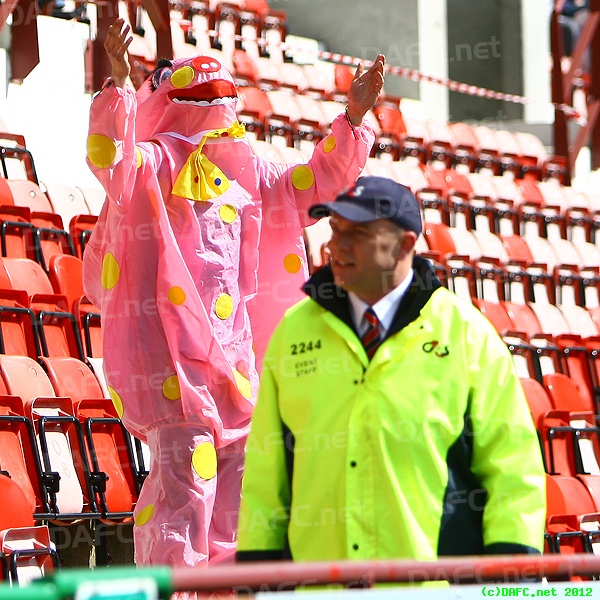 Mr Blobby in the away support. lol

Killie nearly equalised straight from the kick-off when Keddie and Dowie between them missed Toshney’s cross but Harkins headed the bouncing ball over. However the Pars were in the unusual position of not only winning, but being on top. Another Kerr pass, more deliberate this time, again released Buchanan, but this time Thomson got on the way of the shot. A better chance followed just before the half hour. Letheren was put under pressure, and although McDougall couldn’t quite collect his poor clearance, Dowie gathered the ball when it was finally cleared, advanced, and worked the ball via Buchanan and Thomson back to McDougall, but having switched the ball to his left foot, Steven fizzed his shot over the bar. 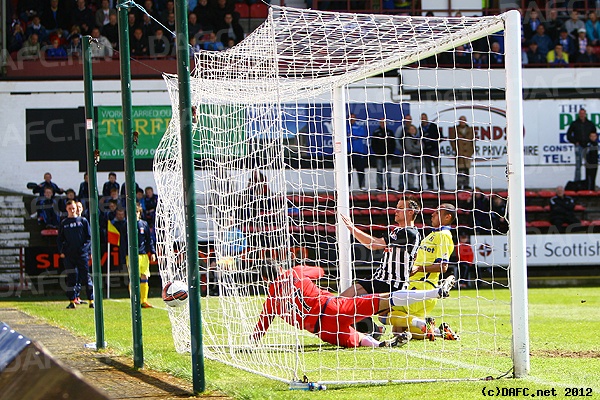 McDougall was beginning to get the pace of the game, making a good turn and run, and finding Willis at the far post but Buchanan’s shot from the lay-off was blocked, as was his shot in 39 minutes after good play down the right with McMillan eventually cutting the ball back from the bye-line.

Killie had to show sooner or later – Fowler tried his luck from long range before first Kelly then Shiels at least forced Fernandez into making comfortable saves. However, the Pars just about deserved their lead at the break. 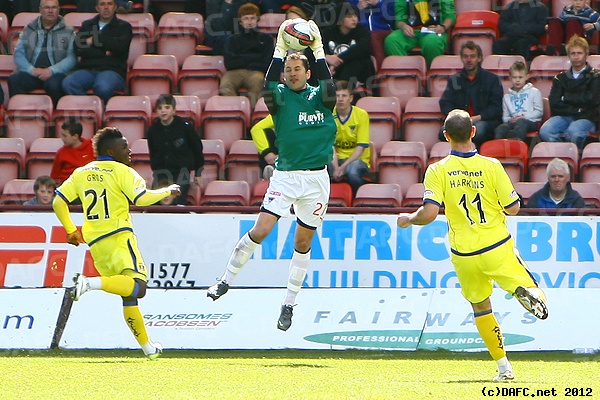 A reaction was expected, and after McDougall had been thwarted early on after ghosting past a couple of players, it was all Killie. A swift break saw Fernández save from Gros with his legs, then Dowie had to head over from under his own bar after Harkins had found the time and space to chip over the keeper. Gros tried to catch the Spanish keeper out with a quick free-kick but was off target and Harkins tried a similar trick, forcing the keeper to back-peddle and tip over the bar. The new keeper looked confident though – not scared to come of his line to claim aerial balls, and made several decent claims.