The Pars extended their unbeaten run to 5 under caretaker boss Jim McIntyre with a narrow 2-1 win over Stirling Albion which came courtesy of two first half goals from the Zipper brothers. However they were made to fight for the 3 points by the bottom-of-the-table visitors who only had a long range effort from Chris Aitken to show for their second half dominance.

The home team made one change to the eleven that had started the last two games, with Scott Morrison coming in on the left side of midfield instead of Bobby Ryan who dropped out altogether. Thus the Pars lined up with Paul Gallacher in goals, a back four of Woods, Thomson, Harris and Murphy, a midfield quartet of McGlinchey wide right with Glass and Simmons in the engine room and Morrison on the left, topped by the usual pairing of Burchill and Hamilton up front. There was no place for Phinn on the attack-minded bench which boasted Williamson as well as Crawford, McManus, boss McIntyre and sub goalie Paterson. 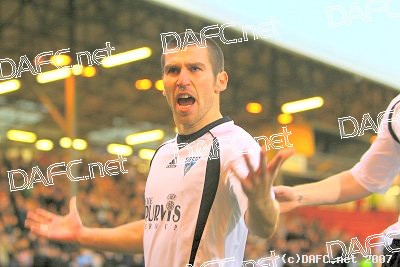 On a beautiful crisp and dry winter’s afternoon the Pars kicked off towards the Norrie looking to record their 3rd league win on the bounce and got off to a perfect start as McIntyre’s selection switch produced immediate dividends; Morrison was fed wide on the left, hit the bye-line and crossed deep to the back post where Hamilton chose to head back across goal finding Burchill who ghosted in to score with a carefully placed header. One nil to the Pars and only 76 seconds on the clock. 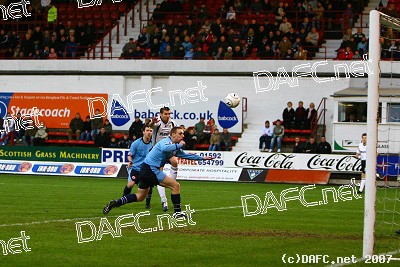 The Binos fought back and in 3 minutes Woods was forced to concede a corner from which Bell had a free header, which he put straight at Gallacher.

The Pars had a scare in 14 minutes when Gallacher spilled a Lilley shot but the stand-side assistant’s flag spared the on-loan stopper’s blushes before McKenna could bundle the ball over the line.

Hamilton had the ball in the net 5 minutes later as McGlinchey did well to retrieve and centre a Burchill flick but the big man was clearly off-side.

Burchill looked to have had a reasonable penalty shout turned down as he tumbled under pressure mid-way through the half, but the ref waved play on, Simmons following up with a weak shot, albeit on target. The Pars were beginning to play some decent stuff, principally down the left with Morrison Glass and Murphy linking well and even Hamilton was looking more like an athlete as he managed to stretch out a toe to divert a clearance into McGlinchey’s path, precipitating a surge down the right, where Woods’ lung-bursting overlap managed to win a corner.

This led to some sustained pressure and after 34 minutes Simmons rose to power a header just past the post from Glass’s outswinging corner. 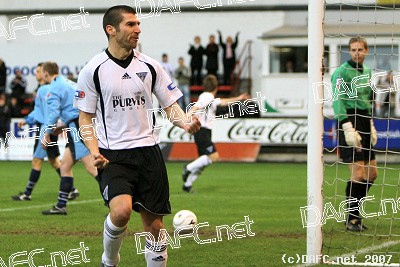 Albion were by no means out of it, channelling most of their play through Aitken and Gallacher had to make a couple of straightforward saves to preserve the lead.

With 5 minutes to the break, referee Boyd had words with Burchill following an enthusiastic challenge at the edge of the visitor’s box. A quickly-taken free kick was intercepted by the alert Morrison and Nugent had to take a yellow as he tripped the Pars midfielder who was forced to leave the field following treatment.

Perhaps the referee was startled by Nipper popping up in the outside right position but he was a bit slow to wave the Pars player back on. No damage was done, and with 15 seconds of normal time remaining in the the first half the Pars doubled their lead.

Burchill poked the ball wide to McGlinchey on the right who drove the ball low across the face of goal and Simmons was on hand to turn the ball home past Hogarth’s despairing drive and make the half-time oranges in the home dressing room taste that little bit more sweet. 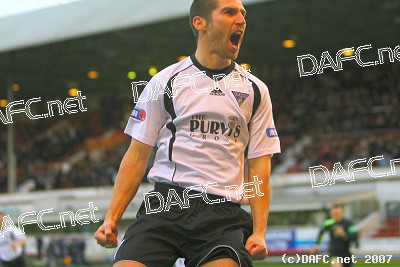 The Pars started the second half with an enforced switch as Stevie Crawford replaced Glass in the heart of midfield (and as captain). Calum Woods was continuing to get forward whenever possible and won a corner after 47 minutes. An in-swinger picked out McGlinchey who had a swing and a miss from 3 yards, when any reasonable contact would surely have resulted in a third Pars goal.

Heartened by this escape the 200 or so Stirling fans began to make themselves held and encouraged their team forward. Some dandy play by the Binos led to a topper of a save in 53 minutes from Gallacher as the former Scotland keeper foiled Lilley after the Albion forward had been played in by a neat back-heel from Bell. Two minutes later Calum Woods had to look lively to concede a corner which Hamilton headed clear. 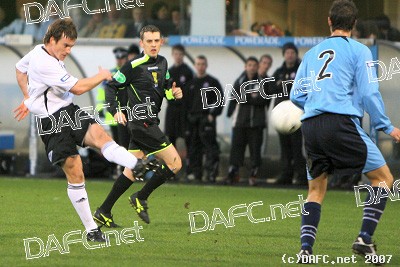 Scott Morrison goes narrowly over with this effort.

However Stirling didn’t have to wait long and after Morrison lost the ball in mid-field in 58 minutes McKenna laid the ball back to Aitken whose shot from 25 yards found the bottom left-hand corner. 2-1 Pars.

Soon after McManus replaced Burchill in a straight swap, with the Pars Number 9 receiving a generous round of applause as he headed up the tunnel.

Stirling should have equalised in 63 minutes as McKenna found himself unchallenged in the 6 yard box with only the keeper to beat. Gallacher dived more in hope than expectation and the net-bound shot deflected off his shoulder for a corner. Soon after Lilley was booked for a lunge on Harris but the no-nonsense defender was none the worse after treatment.