It’s debatable which was more bizarre: the long delay whilst a replacement assistant official was sought, the own goal from the substitute trialist or the fact the Pars actually won a home game. In the end Bayne’s scrappy first half strike led to a comfortable win and the Pars go top.


No surprises in the team selection - Cardle came into the wide-left slot in place of the injured David Graham, but the Pars were otherwise unchanged from the team victorious at Greenock. Fleming was in goals, Woods, McGregor, Higgins and McCann were the back 4 (reading from right to left), Gibson was on the right, Bell and Burke in the middle and of course Kirk and Bayne up front. Muirhead was on the bench, along with expected quartet of Phinn, McDougall, Dowie and Paterson.

The big talking point early on was the performance of the referee, or lack thereof. Anthony Law didn’t look the fittest taking the field, and lasted just longer than the legendary Noel Whelan being in difficulties barely 2 and a half minutes into the game. After some treatment he was carried from the field (clearly stretchers are only for the players) and an appeal went up for any qualified linesmen to make themselves known to the nearest steward. A handful of volunteers stepped forward, and 14 minutes later (with the Pars belatedly opting to restart their cross-field jog and sprint routine after 12 minutes of aimless passing the ball), we were back in business, the new lino running the line in front of the North West stance, whence he had come.


The black-shirted substitute official soon had a decision to make as Baird got behind the Pars’ rearguard, but kept his flag down. From an acute angle Fleming did well to keep the low shot out, the ball finishing in the side-netting, but had an easier task clutching Donnelly’s header from the subsequent corner.

The Pars took a while to settle after the interruption, but Gibson was prominent on the right and causing more problems than Cardle who not only had to put up with close attention from his former team-mates but also had the jeers of the Airdrie fans in the North-East stand to contend with. However after a couple of long range efforts from Gibson, Cardle had the best Pars chance to date when the visitors failed to clear a cross, cutting inside but sending a fierce drive just over the top.


There were 34 minutes on the clock (albeit only 20 of actual play) when the Pars took the lead. McGregor had made a fine blocking tackle to gain possession deep in his own half and the ball was fed wide to Gibson. He found Kirk who played a nice reverse ball back to Gibson who had gone round the outside. The winger’s cross was blocked for a corner with Burke given the responsibility. Stephen Robertson in the Airdrie goal is not the tallest, and with Burke putting the ball in under the crossbar it fell to Bayne who bundled the ball over the line. 1-0 Pars, with Burke getting most of the on-field plaudits. 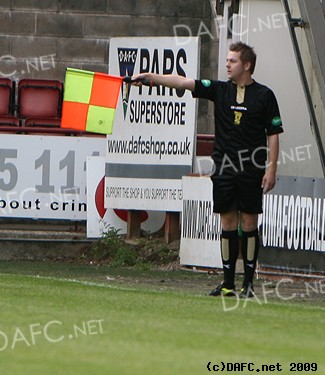 A poor throw out by Robertson in 41 minutes was gathered by Gibson whose quick feet took him past two players but as he set up Kirk the latter was tackled in the act of shooting. The Pars were dominating possession, but were still vulnerable to the break and in 42 minutes Lagana was through one on one with Fleming, but the Pars Number 1 blocked with his chest.

As the game moved into 14 minutes of stoppage time Bayne and McDonald tangled in midfield; both players were on the ground, with McDonald slower to rise as the Pars came away with the ball. Possibly unconnected with this the new assistant referee called Mr Braidwood’s attention to something that had happened off the ball, and McDonald was carded. The ref didn’t need any help two minutes later when the whole stadium saw Lovering body-check Kirk and the full-back also saw yellow. 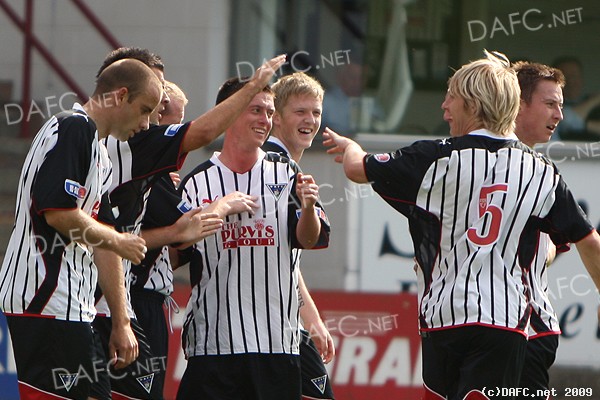 After the usual slow start from the home side, Higgins giving away a free-kick 30 yards out then Fleming having to race from his line to clear, the Pars got going a little. Cardle finally began to feature, relieving the early pressure with a run from deep and a pass to Gibson, and the latter showed excellent sleight of feet to beat a player and find Bayne, before gathering the return and setting up Cardle. Joe tried a lob this time, but was off target. Cardle did better in 55 minutes picking up a deep cross after Kirk, Bell and Gibson had combined well, but Robertson saved with his legs.