With the poor weather and two teams from the same division this was never going to be either a classic or a traditional blood and guts cup-tie. However, the faithful will be happy with two goals, a clean sheet and a place in the next round at the expense of a tough Clyde side.


Graham Bayne had recovered from his bout of food-poisoning and so it was no surprise that he regained his place in the starting eleven at the expense of Greg Ross who dropped out of the squad completely. The midfield was also reshuffled but otherwise there were no shock selections. Thus the Pars team which took the field in their black and white stripes was Gallacher in goals, a back 4 of Woods, Shields, Scott Wilson (the skipper) and Muirhead; a midfield of Bell on the right, Glass and Phinn in the middle with Loy on the left; Kirk and Bayne were reunited up front. New loan star Jamie Mole had to be content with a place on the bench, alongside Burke, Paul Willis, the returning Scott Thomson, and Greg Paterson as back-up keeper. 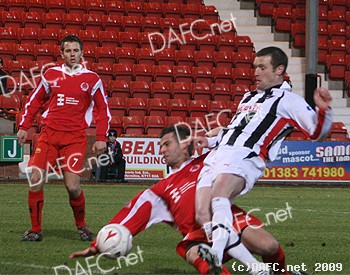 The Pars kicked off into a gusting wind with Clyde, who adopted a 3-5-2 formation, defending the Norrie McCathie end. There was an early scare for Greg Shields when he lost Clarke and appeared to injure himself, but Gallacher was on hand to collect the ball and offer assistance to his colleague who was able to resume without further alarm.

Calum Woods had the Pars’ first effort in 5 minutes when he shot from distance after a Glass pass, but his effort would have missed a second set of goals alongside the real target and after Bayne’s acrobatic leap got on the end of Shields’ free kick Kettlewell did well to hold Kirk off in the 6 yard box long enough for keeper Hutton to grab the loose ball.

The early stages were punctuated by a number of fouls as the Clyde midfield showed they were up for the physical battle but they could show skill as well and a good move set up Clarke in 9 minutes but Gallacher was equal to the former Par’s glanced effort.

The conditions - sweeping rain and blustery wind - were not conducive to any sort of football and Bell in particular was incurring the ire of the home fans with his inability to get into the game. However that changed in 19 minutes. Kirk did well to retain possession despite been on the deck, then timed his ball inside Higgins to perfection ,allowing Bell to reach the bye-line. Steven’s cross was low and firm and the onrushing Phinn bundled the ball home at the back-post. 1-0 Pars.


Two minutes later and the Pars nearly doubled their lead - Bell managed to knock an awkwardly bouncing ball to Bayne whose driven cross from the corner of the penalty-box was met by the head of Loy, the ball slipping past Hutton’s post. Hutton himself kept Kirk at bay a minute later, clawing away a looping header. Woods came forward with one of his trade-mark runs but delayed his chance to shoot and the Pars short spell of dominance came to an end.


Gallacher was alert to thwart Clarke’s neat back-heel in 26 minutes and a minute later Shields could count himself a tad unfortunate to receive the game’s first yellow card. After referee O’Reilly ingnored claims for a penalty when Muirhead fended off McKay, Kettlewell also saw yellow, followed shortly after by Calum Woods, the latter whipping Trouten’s legs away from under him. From the resultant free-kick McKay should have done better and at least forced a save when he put his back-post header over the bar.

The visitors started the second half on top; Loy made up a lot of ground to put in a saving tackle on McLaren before the latter could pull the trigger, and Gibson headed over from a corner after Woods had tackled Trouten. Woods wasn’t tight enough on McLennan but got back in time to block the mid-fielder’s shot, and in 58 minutes Clarke dragged his shot from the edge of the box wide, after doing well to create space for himself.

Cometh the hour, cometh the substitution. Manager McIntyre made his first unenforced change more or less on time, giving Jamie Mole just over the half hour to see what he could do, in a straight swap for Andy Kirk.