Three quick-fire goals earn three precious points for the Pars, in a strange echo of the last match at East End Park. David Graham makes a welcome return, but the Pars give away yet another penalty.


The fortnight’s break allowed Woods and David Graham to recover enough to feature, and they took the squad places of McCann and the injured Willis. Macca reverted to 4-4-2 with Fleming retaining his place between the sticks and Ross and Muirhead the full back slots. With no sign of Higgins, McGregor and Dowie were the centre half partnership of choice. Phinn and Burke were in the middle, Gibson on the right and Graham left, and recent international call-up Kirk was back in the starting eleven alongside captain Bayne. Ex-Par Brian Reid sent out a similar formation for the visitors, with the experience of Mark Roberts up front and, confusingly, Billy Gibson in the heart of their defence. 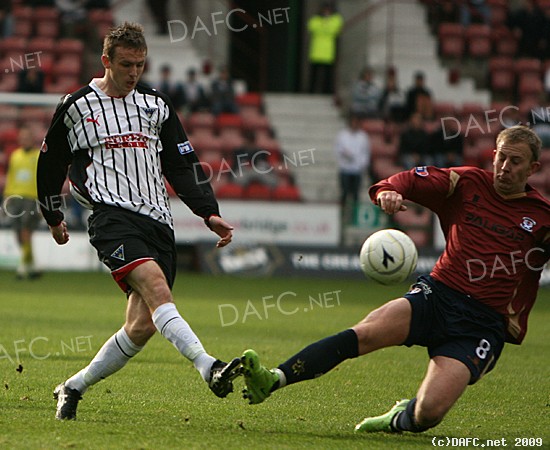 Greg Ross fires in a cross

The Pars kicked off in their first choice strip attacking the Cowdenbeath end but were slow to get going - an early Graham run down the left showed promise but soon fizzled out, and Ayr had slightly the better of things. Dowie got himself nutmegged but Ross was alert enough to divert the ball back to Fleming’s stronger, left foot and the danger was cleared. Right back Keenan had the game’s first shot from 25 yards in the 10th minute but the disabled fans over by the tunnel were in greater jeopardy than Fleming’s goal.

Then suddenly the Pars should have scored. In 13 minutes Bayne put in a cross from the right touchline which found its way to Graham, totally unmarked 10 yards out. With more time than he realised David lashed it first time and Samson produced a fine save when he shouldn’t really have had an earthly. Ayr hit back almost immediately when Connoly curved one from the corner of the box but it drifted past Fleming’s left hand post.

The Pars continued to struggle, Kirk being unable to get any purchase on Gibson’s early cross mid-way through the half, and rather than being patient and keeping it simple were too often resorting to over-ambitious passes, although Phinn found Graham with a superb through ball just on the half-hour. However the winger’s first touch was a bit heavy, and his attempt to cut-back to Kirk was quashed by Billy Gibson.

Dougie McDonald took exception to Graham Bayne’s lunging tackle in 32 minutes and booked the Pars captain, meaning he would have to be careful for the rest of the match, but that was pretty much it for a disappointing half - Graham had a deflected shot comfortably saved by Samson after being set up by Gibson, Burke showed his vision to get back to cut out Cawley’s dangerous cross, and Kirk had a glimmer of a chance right on half time, but had to settle for a fruitless corner. So no goals at the break (a huge improvement on last time) but would the Pars rue that missed sitter?

McGregor challenges for the ball

Calum Woods had been doing an extended warm up before the break, so it was no surprise to see him stripped and ready start the second half, and he took over at left back when Muirhead failed to reappear.
The Pars nearly got off to a flyer - Bayne not only won a header but found a team-mate; perhaps the novelty of this occurrence surprised Keenan and he brought Graham down and was booked. A neatly worked free-kick saw Gibson play the ball to Burke who doubled back to find Graham in space, but his shot was blocked and looped over the bar.

A couple of minutes later and the Pars did have the ball in the net after Graham’s cross had been returned to the danger area by Gibson, but Kirk had been too quick in his anticipation of Bayne’s shot being blocked and his effort was flagged off-side. However, Kirk was not to be denied 7 minutes later. Woods had the ball on the left but fed it inside to the ever-eager Burke who in turn found Ross up from right-back in support. Greg helped it on to Gibson, he skipped past the full back, cut back from the bye-line and Kirk hit his shot from 6 yards across the keeper inside his right hand post. 1-0 Pars.


One minute later and it was 2. Kirk’s pass from the half-way line took a slight deflection and deviated perfectly for Graham to run on to. The winger cut inside onto his right foot but his shot was blocked - only as far as Gibson, who took a touch before hitting a left foot shot that looped over Samson from 12 yards. 2-0 Pars.