When the fixtures were announced before the season’s start, this could have been seen as a possible championship decider. However, to the benefit of many frayed nerves, it was merely an academic exercise as a Phinn double and a late Clarke strike silenced any remaining doubts that the Pars would finish the season as both actual and “moral” champions.


There may have been a party atmosphere at East End Park, with various honours s being awarded to several players pre-match, and the promise of the presentation First Division championship trophy itself after the 90 minutes, but there was still a game against our bitterest rivals to be won, and the chance to put to bed any suggestions from Dundee way that the Pars were somehow not moral winners.

Injury victims Calum Woods and Martin Hardie were both rated 50/50 overnight to make the team; in the end, neither did and so Dowie had to move back to the right-back spot where he had finished the game at Cappielow, with Phinn coming into start in midfield. The rest of the eleven were the usual suspects – Chris Smith in goals, Austin McCann at left-back, Rutkiewicz and Keddie at centre-back, Mason in the middle, Graham and Cardle on the wings and Kirk and McDougall in attack. Even the bench was the first choice, with the possible exception of replacement keeper Kyle Allison – no giving fringe players a run-out even with the league won– with Burke, Higgins, Buchanan and Clarke all ready and waiting.

As for the Bairns, they made four changes but also went with a 4-4-2, the two being Tam McManus and Mark Stewart, scorer of 22 league goals between them this season. 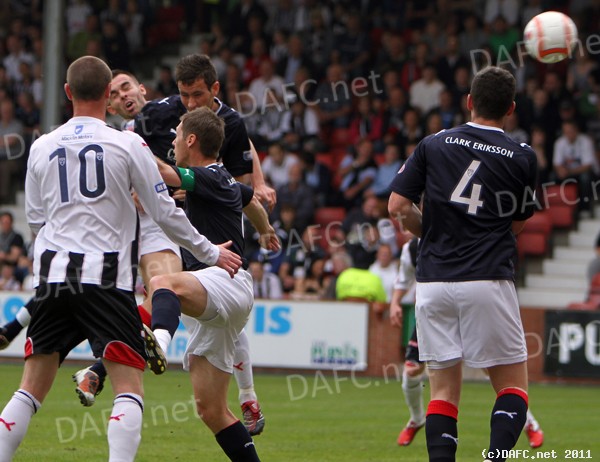 The match started quietly, notable chiefly for the “banter” directed towards the manager of the away team – a cascade of brown shoes appeared trackside and repeated request for a wave from the technical area were granted. On the park, Rutkiewicz put in a couple of ball-winning tackles, but it was the visitors who had the better of the early exchanges. Higginbotham stole a yard from Mason in 7th minutes but dragged his shot from the edge of the box wide, and a quick break from Stewart allowed him to cross to the back post where Cardle belatedly managed to put some pressure on Duffie as he headed off target. 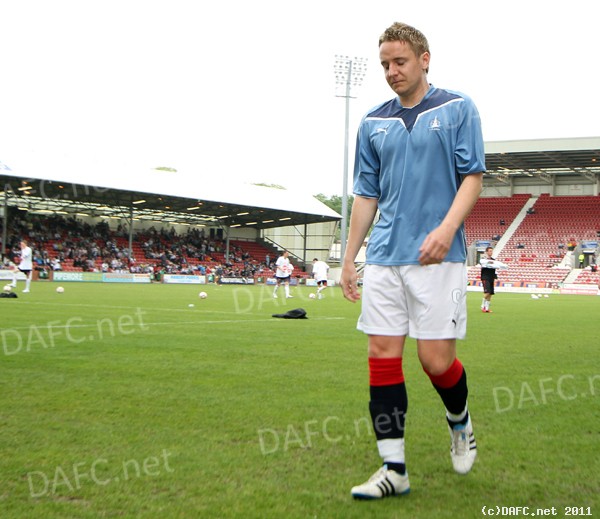 Tam McManus heads down the tunnel after the warm up

Phinn was similarly better late than never with his defensive duties after 12 minutes, deflecting a cross for a corner whence Keddie twice had to block Perry. Phinn’s timing was better a couple of minutes later when he arrived to get his head on a Graham cross but his effort was straight at Olejnik. However, this dress rehearsal proved helpful midway through the half as a neat Graham turn by the corner-flag followed by a whipped cross found Phinn timing his arrival to perfection to bullet home the opening goal from 10 yards, taking a head-knock in the process. 1-0 Pars.

The Pars continued to press, and both McDougall and Cardle were able to put in dangerous crosses from the left without creating a scoring opportunity. In fact, the closest things came from the Bairns. First, after a long period of Pars possession, with pass after pass after pass being completed, Graham couldn’t quite keep control and a swift break ended with Rutkiewicz having to concede a corner which Flynn won in the air but his header was collected on the bounce by Smith. Then right on 45 minutes Compton managed to make progress down the left and beat both Graham and Dowie, but threw in an extra step-over allowing Rutkiewicz time to block his effort at close range.


The unbeaten run seems to have instilled a belief both on and off the park that the Pars will go on and score more, rather than sit back, and this seemed to be justified when they started the second period brightly. An early foul on Andy Kirk gave Cardle the opportunity to create danger with a free-kick in front of the enclosure. Kirk took his time to replace his boot before causing confusion by making a late run into the box, allowing Dowie a header at the back post, but he couldn’t direct it on target. 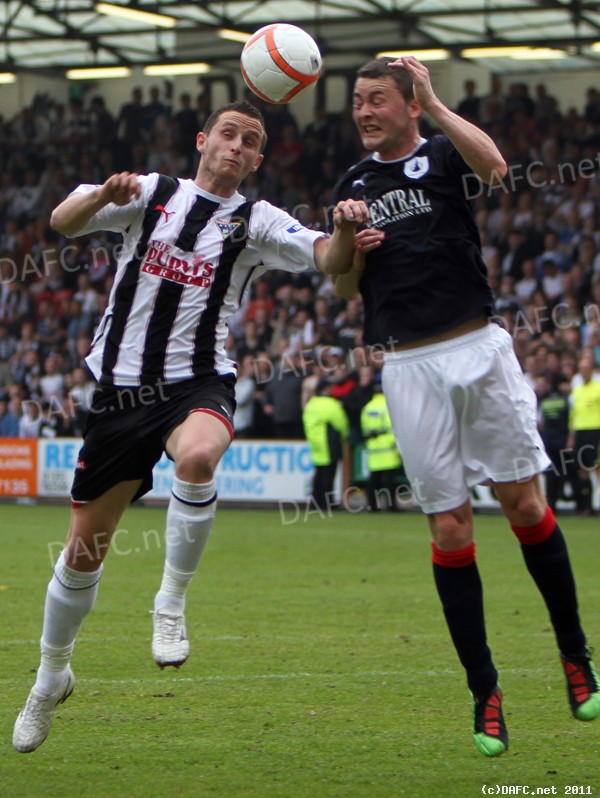 McDougal challenges Scobbie in the air

A weak Keddie back-header nearly caused a problem, but Smith took command, coming out of his area to chest the ball down and slip a pass to Rutkiewicz who managed to clear the danger despite slipping himself. However, in 52 minutes the Pars doubled their lead. Both Dowie and Mason had half a chance to shoot but declined, the ball being worked to McDougall on the right instead. From the touchline he sent in a vicious inswinging cross which found Phinn at the back post with a close range header. 2-0 Pars.