Both sides will be kicking themselves for not claming the three points in an entertaining encounter. The Pars deserved their first half lead through Andy Kirk’s delicate finish, and after a Tansey equaliser which was cruelly deflected, Kirk nodded the Pars ahead again. A Gallacher fumble let Hayes score, some poor defending conceded a third and it took a marvellous Martin Hardie free-kick to square things at the death.


This had a much more sensible feel to it - it was August, it was a Saturday afternoon, the Pars were sporting their black and white stripes and were even back to defending the Norrie McCathie end in the first half. Throw in 6 goals and two sides eager to score more and it was almost what football used to be like.

The Pars again started with a 4-4-2, with Hardie reclaiming his place from Dowie in the middle of the park alongside Mason. Burns kept his starting jersey, and Cardle provided the width. The defence was unchanged - Jason Thomson and McCann as the full backs, Gallacher with the gloves and Potter and Keddie the centre-backs, and the two Andies, Barrowman and Kirk, started up top after their goal apiece last week. David Graham was back on the bench with Dowie, McDougall, Smith and the under-21 trio of Ryan Thomson, Willis and Young. Buchanan and Boyle were relegated to the stand where also sat the injured threesome of Bell, Phinn and Rutkiewicz.

Inverness were also playing 4-4-2. There were no Steven Thompsons to confuse, but they did include Doran and Foran, two Gregories in the shape of Tadé and Tansey but only one of the Shinnie brothers on the bench.

Perhaps it was playing some relatively familiar opposition but there was much more poise and control about the Pars’ early performance, Barrowman getting an early header on target, and there were more signs that the Kirk/Barrowman partnership could flourish when an early Kirk dummy allowed his strike partner a run at goal.

Inverness, on the other hand, were reduced to long balls and one in the eighth minute should have given the Pars defence a wake-up call when Doran went down the left and cut back to Tansey but the Merseysider seemed in two minds over whether to hit first time or take a touch, and seemed to shin the ball to a waiting Gallacher.

Hardie was struggling to impose himself, although his concession of a 13th minute free-kick allowed the Pars to break as McCann headed clear then first Keddie then Mason took up the running and fed Cardle. Tokley wasn’t going to let Joe get past him and picked up a yellow card for his pains.


The Pars kept up the pressure, working the ball down both flanks and sending in plenty crosses, although their next chance was fashioned the passing way - Burns to Cardle, who couldn’t set up his own shooting chance and elected to pick out Thomson’s forward run but the full-back’s effort from the angle was beaten away by Esson.

It was an encouraging start then but the Pars still had to be on their guard. Hayes was being particularly closely watched with Cardle helping McCann out but he still managed to find Foran only for Thomson to get between the Irishman and the ball to allow Gallacher to gather. The Pars No. 1 also had to look sharpish - Tansey’s free-kick in 24 minutes was palmed away and then the keeper was up quickly to collect Foran’s tame effort at his near post.


However the Pars made their early superiority pay. Cardle had already been blocked in the act of shooting by Hogg, and his neat reverse pass had allowed Burns a chance but his left-footer went past the post in 26 minutes. One minute later and a simple up an under from Hardie in front of the dug-out saw Burns challenge Tokely for the ball. Kirk had already started his run when Barrowman head-flicked the resultant loose ball into his path and the Northern-Irishman glanced the ball beyond Esson with the outside of his right foot. A top-class finish, and one nil Pars.

Almost immediately Jason Thomson picked up a booking for what looked like a ball-winning tackle, and the Pars lost some momentum, although were still on top. Caley Thistle’s plans were also disrupted by an injury to Gillet prompting a reshuffle with Proctor coming on at right-back, Tokely moving in one, and Piermayr moving flanks to left back, and soon it was time for Sammy’s half-time entertainment of attempting to take a free-kick, elaborately ensuring his wall of ball-boys was the full ten yards before clipping the ball into the unguarded net, to the delight of the fans. Little did we know… 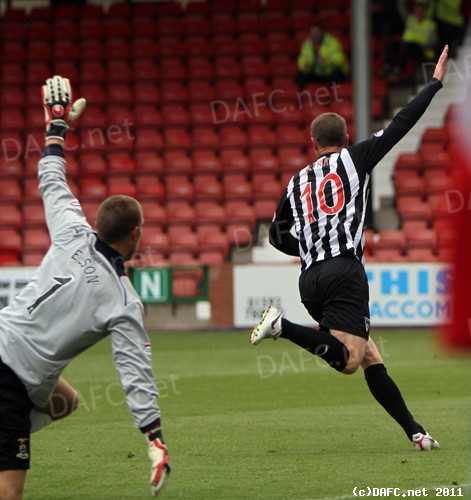 Kirk puts the pars ahead

The Pars might have hoped that their first half performance merited a more comfortable lead, especially since the one they had lasted less than two minutes into the restart. Inverness started with some early pressure, Hardie didn’t take advantage of the chance to clear then he and Cardle were outfoxed by Tansey whose shot from 20 yards looped off Keddie’s heel and over Gallacher. An unlucky goal to concede but 1-1 nevertheless.