The recent new signings were again to the fore as the Pars ran out comfortable winners in a game that saw a perfectly observed minute’s silence in memory of Joe Nelson. Both sides spurned very early chances to open the scoring but after Ross Forbes found the back of the net with a superb strike in 8 minutes the Pars never looked back. Lawrence Shankland tapped home from close range right on half-time before sealing the win late on crashing home a shot after running onto Forbes’ pass.

With a youth cup-tie and a midweek game in the offing, Jim Jefferies took the opportunity ring the changes to the team that had fought back to win at Forfar, resting Ryan Williamson, Lewis Martin and Ryan Wallace. Into the side instead came Lawrence Shankland, Ross Millen and Stephen Husband as the Pars lined up with four at the back and a diamond four in midfield. Scully was in goals of course, and flanking the centre-back paring of Page and Morris were Millen and Grainger as more orthodox full backs. Stephen Husband was at base in front of the back four, with Falkingham to his right and Geggan, who retained the skipper’s arm-band, to his left. Ross Forbes was “in the hole”, behind the front pairing of El Bakhtaoui and Shankland.

That meant there was plenty talent on the bench – Goodfellow as back-up keeper, Williamson for right back, Whittle for left back, Martin as centre-back, Byrne for midfield, Moore as a striker, and Wallace as a spare front man or to provide width as required.

Ayr went with a 3-5-2, but with their main threat Michael Moffatt sitting this one out courtesy of his betting related ban, it was anticipated that they might lack a little potency. The experienced Kevin Kyle was still there to lead the line, however.

After a tribute to Joe Nelson was read out over the tannoy, there was a minute’s silence, impeccably observed as you might have thought. Scott McLaughlin won the toss and chose to kick the right way, meaning the Pars kicked off and within seconds Shankland nearly had a shooting chance, but Falkingham’s pass was a little heavy. Ayr raced to the other end where Malcolm may have done better than shoot straight at Scully.

Forrest too had a good chance, but just dwelled a little allowing Geggan to block. Next we saw El Bakhtaoui use his pace to outstrip the Ayr defence but just when you thought he would score another early goal, he pushed his shot wide. However, the goal soon came – Morris seemed to bang in the back of Kyle, but referee Salmond played on, Morris fed Forbes and he turned and lashed a left foot shot in at Hutton’s left hand post from 30 yards out. 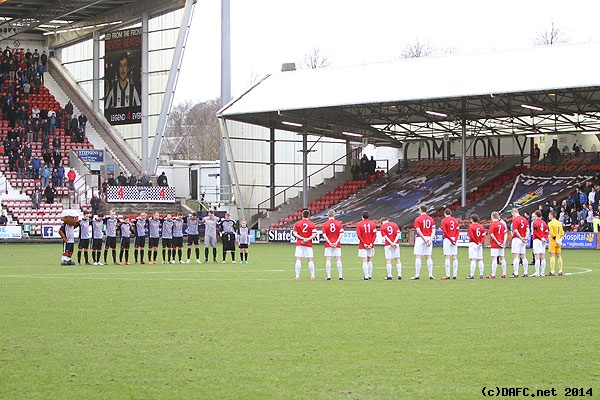 A minutes silence for great Pars servant Joe Nelson who has sadly passed away.

That settled the Pars down, and they should have had a second midway through the half. The lively El Bakhtaoui turned and hit the byeline, but Shankland opened his body a little too much and diverted the ball past the far post, when any decent contact would surely have scored.

The Pars continued to look the likelier side – Forbes was on the corners from the right, and he picked out Morris shortly after, but his header was blocked, before, in what looked like a move from the training ground, Millen, from the other wing, found the run of Husband, but he sent his header narrowly past the post. 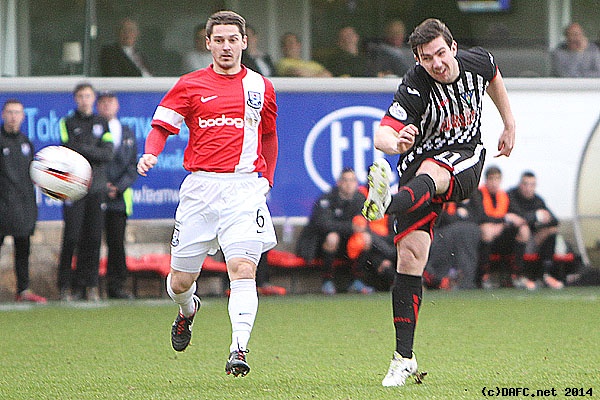 Ross Forbes opens the scoring with this effort.

We weren’t seeing that much from Ayr – they were not resorting to the long ball so much, as they tried to play football, but with little joy. However, in 34 minutes, a corner was cleared to Crawford, and his volley skewed wide, only for Donald to find himself in the way, and his quick header just evaded the far post. 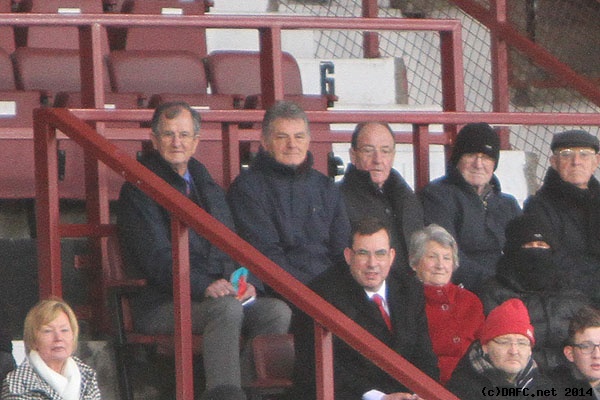 Morris and Page seemed to be gelling well, with just one brief moment of understanding, but they managed to clear that up with a little help, before the Pars doubled their lead right at the break. A Husband free-kick into the box was only half-cleared as far as Forbes. He took a touch, turned and decided on another shot. That hit the post, and rolled along the line. It may have gone in off the far post, but Shankland did the sensible thing and poked the ball over the line, crashing into the post himself. 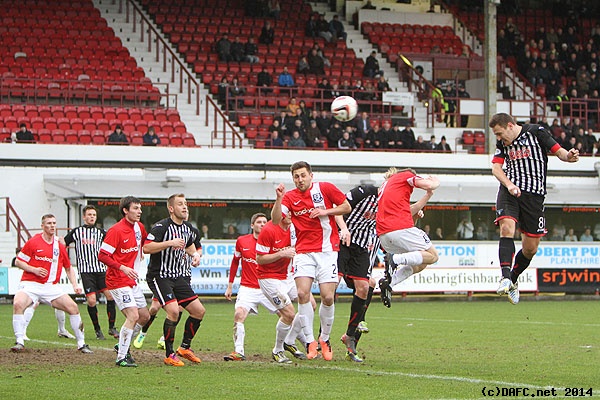 There was a slight delay in restarting as Donald was late in taking the field, but we were underway eventually with Ayr understandably adopting a more direct approach. However, although Kyle got some joy, the Pars were winning plenty of second ball. The visitors did threaten briefly: Crawford again shot straight at Scully, before the keeper flapped a little at a ball from the wing, but managed to capture the loose ball himself.