The Pars keep the pressure up with another great win in an impressive 4-1 hammering of Motherwell with the only downside being Scott Wilson`s the sending off.

It was very much "as you were" for the Pars line up tonight as the team that beat St Mirren last week started this next crucial fixture in the Pars fight for survival in the SPL.

The Pars lined up with De Vries in goal, Shields, Wilson, Bamba and Muirhead were the defensive line. The midfield had Glass and Mason in the centre with the wingers Hammill and O`Brien on either side. Tam McManus and Jim McIntyre started in attack.

The Pars were shooting towards their favoured home end and very quickly took the early advantage in 6 minutes with a great finish by Jim O`Brien. Muirhead took the ball forward linked with McIntyre who found Hamill and his cross was whipped over finding O`Brien at the back post who drilled it into the net.

There was a loud shout for a foul on McManus in the Motherwell area in 9 minutes which was waved away by referee McDonald then two seconds later Scott McDonald was adjudged to be fouled by Bamba with very little to choose between either incident. 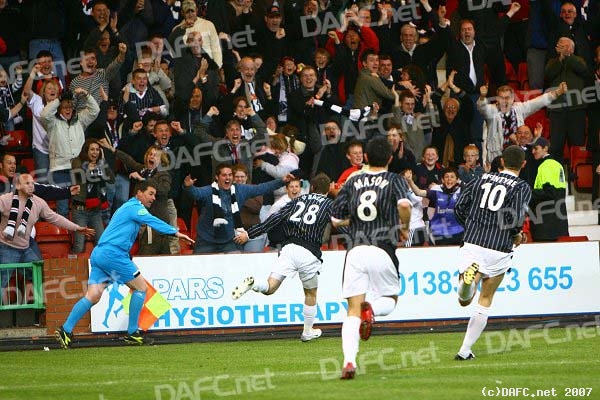 Jim O`Brien celebrates his first goal for the Pars.

The Pars were not for wasting time and increased their lead in 10 minutes with Scott Wilson powering in a header from 8 yards out to make it 2-0.

It was an incredible start and one which clearly knocked Motherwell back. Scott McDonald was the only real danger and he whipped over a low cross leaving half of the Pars defence in his wake in 12 minutes. He then had a weak effort blasted well over the bar in 20 minutes.

Adam Hammill was causing the Motherwell defence problems on the left and he hit a good shot saved by the keeper and then Muirhead did likewise. Scott Muirhead was also paying attention to his defensive duties robbing McDonald of the ball and then bursting forward in 26 minutes. 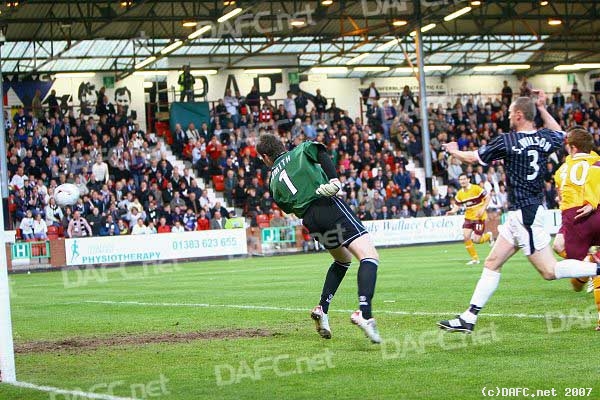 Tam McManus` pace and good cotrol were causing problems and his pace almost got him onto the end of a ball which should have comfortably got to the keeper in 29 minutes. Some of the passing football being played was exceptional and not the form of a team threatened with relegation.

Scott Wilson almost got onto the end of a ball in 39 minutes from a corner touched on by Bamba. The Pars got a deserved standing ovation at half time. 2-0. 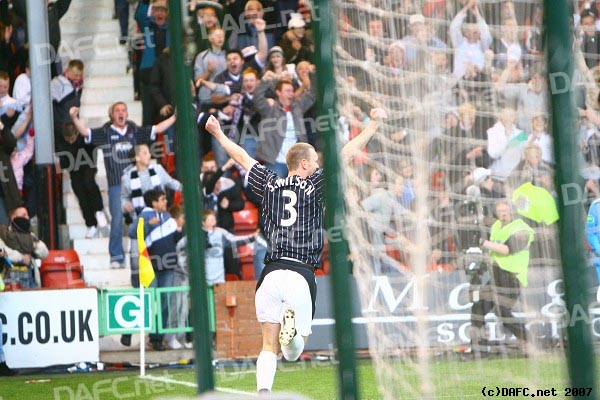 A McManus free kick in 46 minutes was tipped over the bar for a corner. Corrigan was booked for a wild challenge on O`Brien near the half way line. Trying to change things Malpas took off Clarkson and put on McCormack in 53 minutes.

A free kick by Hammill found Bamba at the back post but he was not able to get his shot on target. Then the Pars moved further ahead in 57 minutes when McIntyre was taken down as he ran into the Motherwell area. Stephen Glass took the spot kick scoring in off the post.

It looked as if the Pars might overwhelm the vistors and they should have scored number 4 as a break by O`Brien failed to get the ball to McManus on the far side.

Motherwell hit back with a shot saved by De Vries and then again from the resulting corner he tipped a shot over the bar.