Unless there is something meaningful to play for (and I don’t really count a top four finish) the last home game of the season is always a slightly strange affair. Some players may be seen for the last time in a Pars shirt (although you don’t know who yet), sometimes (but not today)a youngster gets an unexpected debut, there are off-field distractions pre-match such as player- of-the-year presentations and children releasing balloons whilst simultaneously dodging stray shots from the warm-up shooting practice, and occasionally, you get a decent performance. Today we had much of that, Steven Bell completing a hat-trick with an injury time penalty as the Pars score four in the league at home for the first (and last) time this season.


Pre-match rumours that McGregor and possibly even Andy Kirk would be fit enough to make the squad proved groundless, with Cardle for McDougall the only change to the squad. Chris Higgins and Mason were relegated to the bench, with Burke and Ross coming in to the starting line-up, the latter at right back as Woods moved inside. The shortage of striking options meant the Pars went with what looked like a 4-1-4-1. Smith was in goals with a back four of Ross, Dowie, Woods and McCann; Burke looked to be the holding midfielder with Bell and Phinn also in the middle; Cardle was on the left, Gibson on the right and David Graham largely on his own up front. Morton, on the other hand went with a more traditional 4-4-2, with Peter Weatherson being joined at the apex of their formation by the Austrian Witteveen, on loan from Hearts. 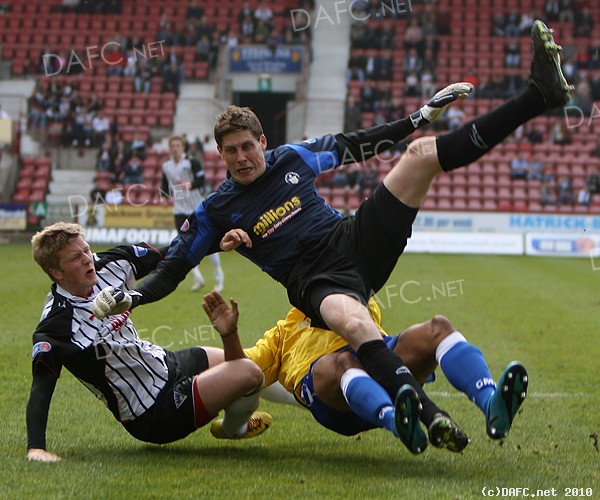 Clash in the box

Morton had the game’s first chance in 4 minutes, Witteveen getting the better of Ross by the corner flag and working the ball to Weatherson who spun 8 yards out, but shot straight at Smith. The Pars also had an early chance, with Graham getting the break of the ball off Shimmin, but the big centre-back and his keeper thwarted the second attempt at the expense of a corner. Not that this was much to get excited about, the Pars not scoring often from such set-pieces, and having the aerial threat of Cardle, Graham and Phinn, the omens were not propitious. However, Gibson, back in his yellow boots after a dalliance with a white pair in Inverness, drilled in the corner to pick out Phinn, completely unmarked 8 yards out and he bulleted his free header beyond Stewart. 1-0 Pars.

The visitors tried to counter immediately, Witteveen nut-megging Dowie but Burke was back to block Weatherson as he shot. Perhaps strangely for a team managed by James Grady, Morton are a big, hulking side, and there was little point in playing the long ball given the centre-backs had at least a 5 inch height advantage over David Graham. Instead the Pars looked to build from the back, Smith often throwing the ball early to one or other of his full backs, each of whom took turns at getting forward. After that early chance, Morton created little, although Tidser wasn’t afraid to have a go from distance, space opening up for him midway through the half, but Smith held comfortably. 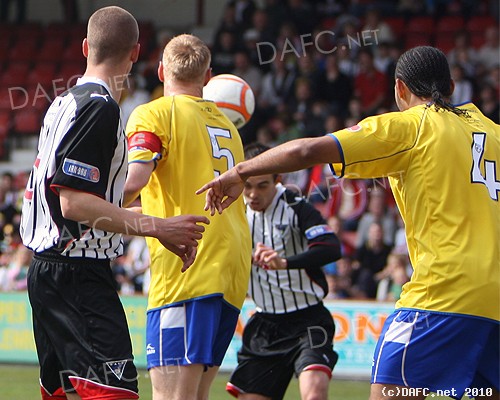 A Pars break from a Morton corner saw McCann race half the length of the field to win another corner when his attempt to pick out Graham at the back post was put behind. This time Woods met Gibson’s kick but headed over. The Pars did extend their lead however, in 27 minutes following some patient build up. Phinn collected a pass on the left from McCann but seemed to turn away from goal and instead hit a right footed cross to the back post. This was headed clear but only as far as Ross who drove it in from a wide angle first time, and Bell took a good first touch beyond his man and stuck it in the far corner from a narrow angle – an excellent finish, and 2-0 Pars.

The Pars should have been cruising, but just after the half hour mark some indecision between Dowie and Smith allowed Witteveen to nip in between the pair of them and poke the ball goalwards. Woods and Dowie nearly got in each other’s way, but Woods took responsibility in the nick of time as the Austrian made up ground, to boot the ball clear and preserve the two-goal cushion.

However, Morton were handed a lifeline six minutes from the break. Woods seemed to be in no difficulty at the corner of the box but Witteveen played the ball of the defender’s hand, appealed to the assistant, who agreed, and referee Conroy gave a spot kick. Woods expressed a contrary opinion and was booked, and Monti sent Smith the wrong way. 2-1 Pars.

Simmonds came on for Weatherson and nearly equalised with his first touch (of the ball, his first actual touch being a little shove on Ross to set up the chance) but fired wide, before the Pars restored the two-goal lead out of nothing. Phinn’s ball through a static Morton defence found Bell in yards of space and he flicked it away neatly beyond Stewart from close in. 3-1 Pars.

There were more shouts for a penalty when Phinn chested off the line after a Morton corner was only half cleared, but referee Conroy wasn’t interested. Not a half replete with chances, but somehow there had been 4 goals.