On a more defensive theme to the side Owen Morrison could only find a seat on the bench and Calum Woods was out through injury. In their places was the eagerly anticipated return of Captain Greg Shields who returned after five weeks through injury and Souleymayne Bamba returned to the starting line up after only featuring on the bench last week.

Celtic kicked off and were attacking towards the Away "end".

Early stages saw the Pars contain the Celtic attack which is always crucial in the first 20 minutes against the Old Infirm, particularly on their own patch surrounded by thousands of glory-hunters.

Dorus de Vries was called upon his skills in the first 3 minutes when he tipped a 35 yard shot from Gary Caldwell round the post for a corner.

Shunsuke Nakamura flighted two corners right into the danger area, which the Pars struggled with. The first, a McManus header was deflected over and the second de Vries did well with a Jan Vennegoor effort.

On the 19th minute Thomas Gravesen fired in an effort which was blocked by de Vries and Phil McGuire was there first to "boot" the ball away into safety. 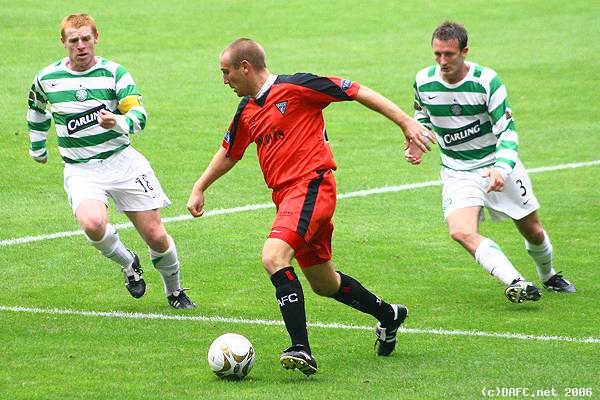 The Pars first chance came on the 25th minute. Darren Young fired in a 25 yard shot that Artur Boruc palmed away for a corner.

The new striking partnership of Stevie Crawford and Jim Hamilton looked to be distant at times with them being far apart for most of the game. There was one chance between them early on in the game when Crawford crossed in the ball for Hamilton to head the ball narrowly wide of the right hand post.

Celtic were now starting to push forward themselves and there was a couple of corners conceded from clearances. Nakamura flighted in a corner just in front of the travelling support and STEPHEN McMANUS beat Greg Shields to it and score at the near post.

Celic were looking to double their lead and almost did when Kenny Miller blasted a header in but de Vries was more than a match. De Vries also blocked Nakamura from 12 yards out with his feet as the Pars were riding out the storm from the Celtic attack who were determined to seal the win.

The woodwork was the saviour this time as Gravesen blasted a 18 yard shot in and when the rebound fell to Kenny Miller his effort went narrowly over the bar.

The Pars had the first attack after the break with Hamilton putting in a hopefull ball into the area, but with the angle it drifted out harmlessly.

On 56 minuted the Pars found space in the middle of the park which they expolited with crisp passing from Stephen Simmons, Greg Shields and Stevie Crawford. Crawford fired in a shot which was well wide of the target.