Three changes to the side that beat Partick Thistle at East End Park last week.
Jim O` Brien could not play against his registered side and both Gary Mason and Greg Ross could only find a place on the bench. In their place returned Jamie McCunnie from injury, Darren Young and Stephen Glass who was cup-tied last week.

As for Celtic they too made four changes from the side that narrowly beat Inverness in the Scottish Cup last Sunday. Noteworthy absentee was the evil ginger that some people call Neil Lennon.

The Pars kicked off the game attacking the goal in front of the Jock Stein Stand which is the stand on the left-hand-side as you see from the television camera angle. Scott Morrison showed early "enthusiasm" after 90 seconds when he caught Nakamura late which would definately have earned a yellow card if it had been later in the game.

Midfielder Darren Young was playing right-back in a surprising turn from Pars boss Stephen Kenny and after only 3 minutes this back-fired as Young was caught by the pace of Aiden McGeady and the Celtic midfielder found the un-marked KENNY MILLER to open the score from 6 yards. 1-0

The Pars were clearly struggling at the early stages of the game with very desperate defending to accompany the lack of holding possession. De Vries made some save to keep the score down in particular a spectacular save from a Craig Beattie header following a Nakamura free-kick.

Abot half-way throught the first half the heavens opened with hailstones and rain which made the pitch slippery wet and this seemed to suit the Pars better with Wilson and co. sliding in for many challenges on the greasy surface.

Celtic meanwhile were finding their long passing game bouncing off the large pitch and im amongst the very wet Celtic supporters that were seated in the first few rows of the stands.
In a rare attack for the Pars in the first half Stephen Glass broke forward and had an attempt with his wrong foot which sailed about a yard over the bar. Fair doos for having a go - a bit like Jason Dair of old by having an attempt with the strikers being shot-shy. Half Time 1-0

Second half saw the Pars attacking towards the 150 or so Pars fans stuck away in one of the worst corners of the ground. Greg Shields and Mark Burchill were spectating amongst the supporters. Just 5 minutes after the break the ball was again in the Dunfermline net - but this time offside. Gravesen fed the ball to Miller and he lobbed De Vries from about 20 yards but the flag was up early. The Pars had a chance to equalise with Stephen Glass`s shot following a cross from Owen Morrison somehow squandered.

Celtic meanwhile were failing to convert their chances to seal the points, in particularly hitting the woodwork with an effort from Kenny Miller from a Nakamura cross.

Tam McManus took to the field for his Pars debut after a very short warm up - not ideal preparations considering the abnormal amount of muscle injurys the Pars have substained over the past 3 years and he was not to see the ball for a while as Celtic were dominating possession at this time.

On 72 minutes the Pars finally got a corner kick and Celtic managed to head clear the ball delivered by Stephen Glass.

Celtic doubled the score on the 76th minute. Celtic were awarded a corner and Nakamura`s curling cross was cleared and fell again to Nakamura. The Japanese midfielder crossed the ball to Thomas Gravesen who was lurking at the edge of the penalty area in the middle. He volleyed the ball off the ground and JAN VENNEGOOR OF HESSELINK glanced a header to the ball to deflect it slightly from 6 yards for De Vries to have no chance. 2-0 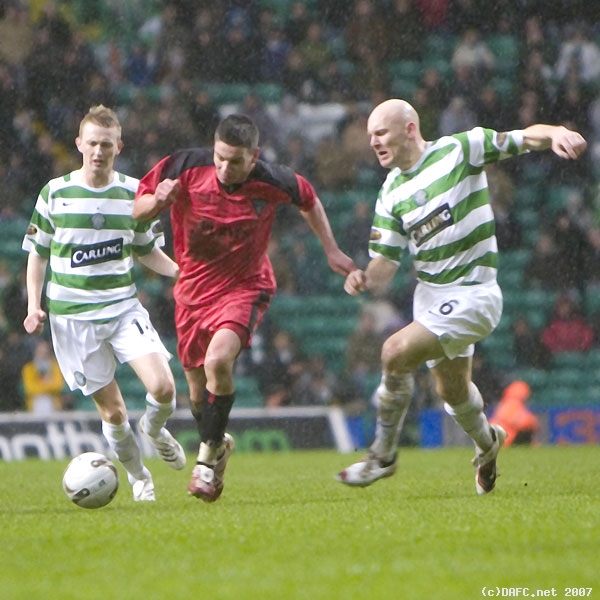 The Pars did bring themselves back into the game with a magnificent solo effort from teenage sensation ADAM HAMMILL three minutes before the end as thousands of Celtic fans were already leaving the stadium. He jinked, stepped over and deceived the defender before executing a perfectly weighted chip into the top left corner that gave keeper Boruc absolutely no chance. 2-1