The Pars were out-thought, out-fought and out-played by a Morton side eager to avoid the relegation play-off spot. Former Par Davie Irons had promised an attacking line-up and with his charges proving to be a yard quicker than their opposite numbers they were well worth their 3 goal victory.

Jim McIntyre made one change to the team which beat Clyde 7 days before, with Phinn replacing Simmons on the right side of midfield, and they lined up with Gallacher in goals, a back four of Woods, Wilson, Thomson and Muirhead,, four across the middle ( Phinn, Young, Glass and Burke) with Crawford getting the nod as the boss’s strike partner. There were places on the bench for both Simmons and Burchilll, neither of whom will be at East End Park come August, alongside Bamba, Williamson and Murdoch. It seemed the manager wanted to keep the momentum of good results going, rather than experiment. 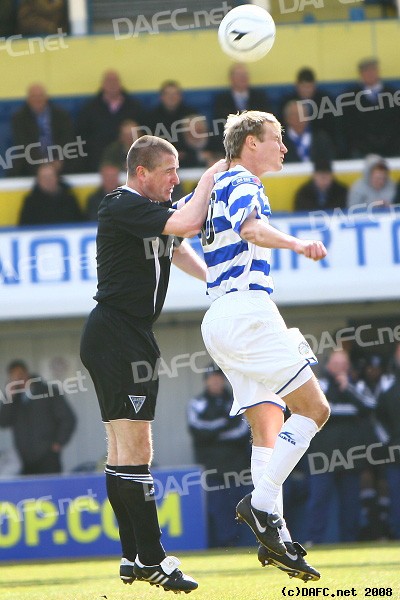 The home team were kicking towards their own fans and after conceding the first chance, some early pressure was rewarded when Brian Wake found the roof of the net in 14 minutes to give Morton the lead.

Buoyed by their good start Morton continued to press and it took a pair of good saves to thwart firstly Russell and secondly Wake who was one-on-one with the former international keeper. After 35 minutes Scott Wilson picked up another yellow card after a mistimed tackle. 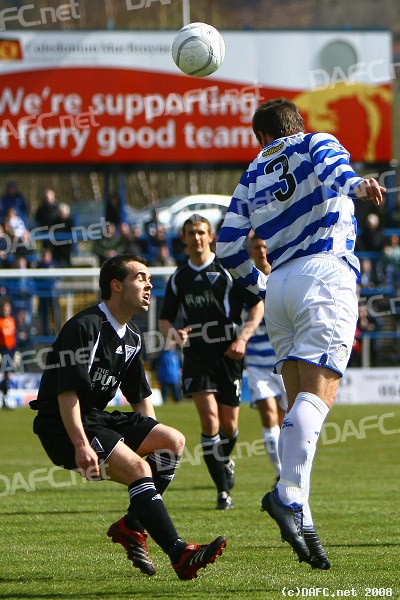 The Pars had the advantage of a stiff breeze and clearly the message was to shoot on sight - although it took until 37 minutes for Stephen Glass to find an effort from 30 yards that was even close to breaching Robinson’s goal.

However the Pars should have equalised 5 minutes before the break when good work by Phinn picked out a lung-bursting run from Young but from 5 yards with the goal at his mercy the midfielder scooped the ball wide.

There was still time for that rarity of recent years - an imaginative Pars free-kick routine. After Burke had been felled at the corner of the box, Glass drove the ball under the wall, McIntyre dummied and the ball deflected for a corner, when it could have gone anywhere.

There were no changes at half-time but it soon became clear the Morton, continuing with their 3-5-2 formation, were planning to use the wind to put pressure on the Pars’ rearguard in general and Gallacher in particular.

After an early scare when Wilson chose to dummy a shot that slid wide, Thomson had to be alert and cleared off the line under a heavy challenge from Russell as the Pars failed to defend positively. Young saw yellow for a combination of a foul and dissent as Nipper lay injured in the back of the goal.