Hearts go into the fourth round draw after fighting back to win 2-1. The Pars take a first half lead through Graham Bayne but a Gary Glen header and a controversial Stewart penalty win it for the home team.

Jim McIntyre made 3 changes from the side that had gone down so tamely at Firhill - out went McCann, Kirk and Cardle, and in came Ross, Holmes and Muirhead as he opted for the "cup-tie" 4-2-3-1 formation. Fleming was in goals, Woods, McGregor, Dowie and Woods along the back, Holmes and Burke in the middle in front of the back 4, Phinn further forward with Gibson on his left and Ross on his right, and Bayne ploughing a lone furrow up front. Higgins was on the bench alongside Paterson with White joining Graham and McDougall in the stand. 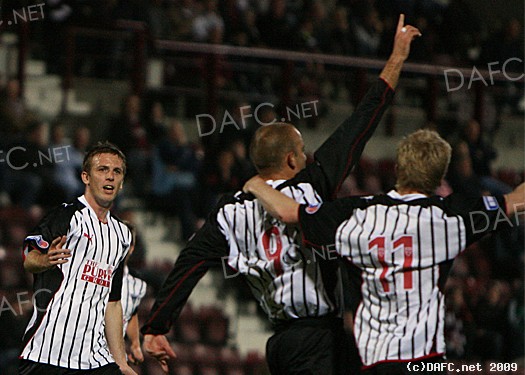 Captain Bayne took the kick-off shooting towards the Gorgie road end and nearly had a chance in the opening minute when Burke found Muirhead in space on the left, but the full-back’s cross just eluded the centre-forward. An encouraging start, underlined when Ross had half a chance from a Muirhead long throw after 6 minutes and again 4 minutes later when Graeme Holmes’ 50 yard cross-field pass was controlled by Gibson but his cross was just too deep for Phinn.

The first foul of the game didn’t arrive until the 13th minute when Mikey Stewart was over-enthusiastic with his challenge on Phinn but Gibson’s effort from 35 yards, although on target, didn’t trouble Balogh in the home goal.

However, the Pars took a deserved lead a minute later with a move which started in their own half. McGregor played a fine ball up the wing to Woods who made progress up the touchline before cutting back to Ross. Greg played a ball into the channel where Bayne had stolen a yard on his marker, before hitting his angled shot from 12 yards across the keeper. Balogh got a hand on it, but couldn’t keep it out. 1-0 Pars.


A minute later and again the Pars looked dangerous - Hearts didn’t clear properly form a corner and Gibson got the ball back - with the home central defence looking for Bayne the winger narrowly failed to pick out the late arrival of Phinn at the back post.

Hearts didn’t seem quite sure of how to counter the Pars line-up, despite the usual animated performance from Csaba Laszlo on the touchline, and Wallace moved further forward on the left as Stewart roamed far and wide in search of the ball. Meanwhile Bayne was giving a masterclass in how to play the lone striker - dragging players out of position , winning almost everything in the air (and more than his fair share on the deck). Hearts didn’t have their first attempt on goal until the 29th minute, shortly after Goncalves had fallen in the box, but Obua wasn’t on target. Zaliukas did find the target in 35 minutes, finding the bottom corner with a header from a free-kick after Burke had fouled Wallace, but he had started his run a fraction early and was flagged off-side. 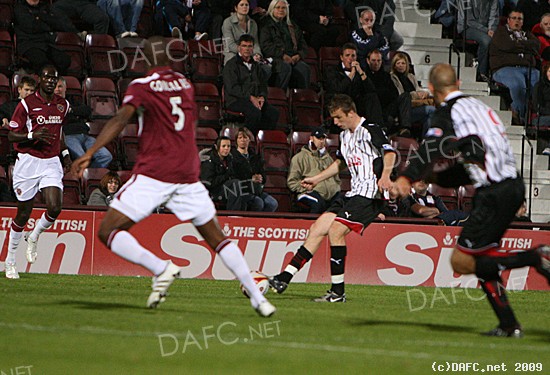 The Pars had a double let-off a few minutes later - after Woods had blocked Wallace’s cross Dowie nodded the resultant long throw behind for a corner which was swung in to the back post. Obua met the ball but Burke was at the post to knock the ball off the line and Obua’s follow up in the ensuing stramash also found bodies in the way before the ball was hoofed clear. The home side were finishing the half with a flourish - McGregor hit a no-nonsense clearance out of the ground through the gap between the top of the Wheatfield Stand and the floodlights for some respite before Glen blazed over from 6 yards.

Hearts find the net, but is ruled out for offside

Ian Black replaced the limping Lee Wallace at the break, with the home team seeking to match the Pars five-man midfield and almost immediately there was danger as Muirhead misjudged a cross before pulling out of a challenge as Santana tumbled in the box. No penalty, but no yellow card either. The next near-thing was of the Pars own making as Fleming’s method of dealing with a pass-back was to dribble past Black prior to clearing.

Hearts had started the second half in dominant fashion, but the equaliser when it came, was slightly fortuitous. Obua and Woods collided in the box as a cross came in, and both went to ground. The Hearts man was first to his feet, gathered the loose ball and whipped in a cross from the bye-line which the unmarked Glen headed home from 6 yards. One each, and again the erring party was immediately substituted - Woods being replaced by Cardle, Ross moving to right back and Phinn to the right.