We’re still in October, but this match was labelled as a relegation 6-pointer between the league’s bottom two. In the end it was one point apiece – a late Buchanan penalty cancelling out Tadé’s first half opener after the Pars had been unlucky not to convert any of several chances.


It is a mark of the Pars more recent performances that only losing two-nil is seen as sufficient improvement to merit a continuation of the 5-4-1 formation, although the rapidly depleting pool of fit players may have been a factor. There were personnel changes – Jason Thomson came back into the starting eleven as right wing back, with Paul Burns moving into a more central position in place of Ryan Thomson, who dropped to the bench and as Andy Dowie had picked up a virus Alex Keddie came in as rightmost of 3 centre backs along with Potter and McCann. The rest of the team was unchanged – Gallacher in goals; Boyle at left centre-back, Mason in the middle of the park, Graham and Cardle in slightly more advance positions and Kirk up top on his own. On the bench we had McDougall, Buchanan and Thomson, the underused Craig Easton, the keeper Smith and youngsters Byrne and Young.

Terry Butcher, manager of bottom club Inverness went with a 4-4-2 – the two being the experienced Richie Foran and Gregory Tadé - picked both Shinnie brothers and had the experienced Ross Tokely at the heart of the defence along with David Proctor.

The Pars kicked off with the strong south-westerly breeze adding a slight randomness to proceedings, although climatic conditions shouldn’t excuse Pierpayr’s late challenge on Cardle, the right-back finding himself yellow carded as early as the second minute. The Pars started on the front foot, although survived an early scare when Tadé broke and outpaced Potter but McCann was on hand to poke the ball clear.

However, that was a rare sign of the home team, with most of the action taking place in front of the Inverness goal. In the eight minute Boyle cut back onto his right foot and sent in a deep cross that Thomson nodded behind the defence where Kirk took a first-time swing at the ball but his shot trundled past the far post.


Kirk won the game’s first corner on the quarter hour, the ball being worked back to Thomson, but his shot looked like he’d hit it with a sand-wedge – the ball ballooning over the bar and towards the Inverness Firth.

At least the Pars were creating chances, which was a welcome change from recent games, and duly produced another two minutes later, Cardle falling over as he played an early ball down the inside left channel which Burns turned back for the inrushing Graham, but he couldn’t control his shot. However the closest thing to a goal came midway through the half, Burns being given time on the right edge of the box to curl in a left footer that hit the inside of the post, rolled along the line and clear, with Esson left totally bemused.


Of course, it wasn’t all one way traffic, Tadé (who as a former Raith Rovers player received plenty of booing) outmuscled McCann to find Foran and when he cut the ball back, Keddie had to slide in to block Ross’s shot, but the Pars were definitely on top. Another corner was won when Thomson latched onto Graham’s reverse ball and Potter leapt higher than anyone to meet Cardle’s driven corner but his effort cannoned off Esson on the line. 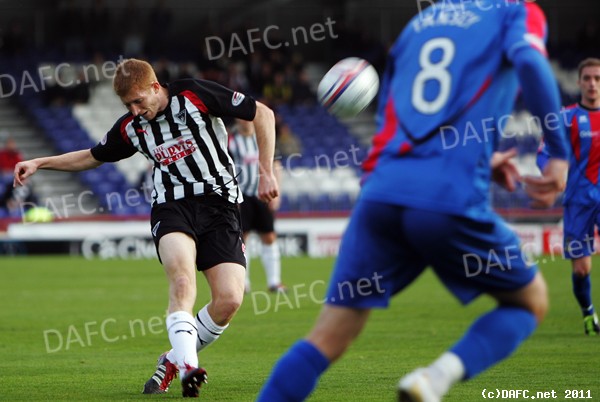 Jason Thomson fires a shot over

Graham and Cardle were also involved in the next chance that fell the Pars’ way in 27 minutes – the former’s volleyed cross being met on the half volley by the latter, but Esson tipped the shot over. However, the Pars couldn’t keep the pressure up, and Inverness hit back. Keddie was doubly lucky when he allowed the ball to bounce in 31 minutes, then missed another chance to put a foot in, giving Andrew Shinnie a shot at goal but Gallacher saved. Worse was to come though – McCann took his eye off an innocuous ball played down the Caley Thistle right, ceding easy possession to Foran and Tadé met the cross with a classic centre-forward’s header from 6 yards. `1-0 ICT

A sucker punch given the balance of play to date, but Inverness rode out the rest of the half without any difficulty and with the Shinnie brothers starting to combine looked the more likely of the sides when the break came. 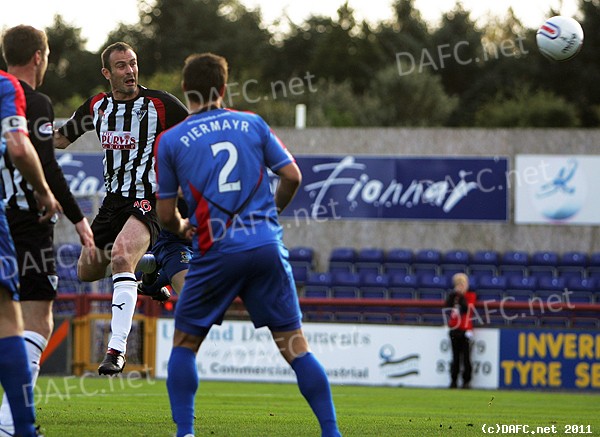 John Potter see`s his header cleared off the line

The Pars were again first out after their half-time cuppa, with no immediate changes but soon Jason Thomson was down injured with no-one near hi, meaning his namesake Ryan Thomson was taking his place on the park, with Paul Burns slotting into the wing-back role.

Some early Pars pressure evaporated without a decent chance being created. We did see a couple of free-kicks, one at each end. First, a Potter body-check on Foran 26 yards out gave Tansey an opportunity to test Gallacher, but his kick was just off-target and then Graham was given a chance at the other end. Ryan Thomson’s thrusting run was brought to an end illegally and Graham was initially looking for a quick kick as he was in yards of space on the left. However referee McLean had signalled that he would have to whistle for the kick to be taken so Graham decided to have a dig himself from 30 yards plus, his low drive going all the way through the wall but was too straight to give Esson too many problems.