Just when the Pars thought they had won a difficult cup-tie they were denied by a last minute Paul Tosh equaliser. After trailing at the break, Clarke and Kirk edged the Pars in front only for Tosh to score his second of the game with a drive through a crowded penalty area.

Four inches of snow in Edinburgh and a dodgy forecast meant I stayed in the pub Friday night, gambling on the match being off, so it was a slight surprise to realise that I would have to dig out my notebook (and my car) after all. However, once my motor had slithered onto the main road, conditions soon improved, and it was a pleasant journey up the M90 and A90, with the sun filing the rear-view mirror, and the prospect of a goal-filled stroll in the (plastic) park. 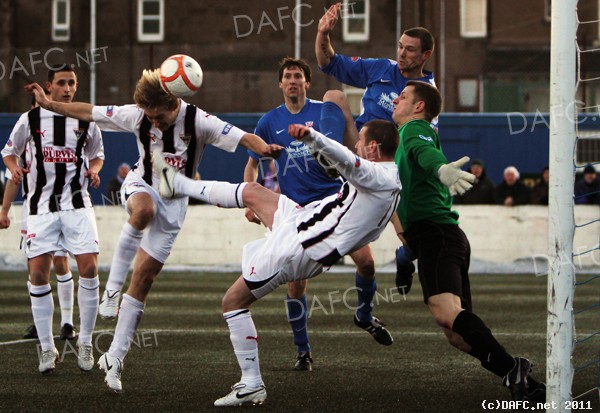 McGregor and Kirk both try and get to the ball

Jim McIntyre isn’t one for experimentation, not when there’s a match to be won, but he did make a couple of changes. Kirk came in for Clarke, and McGregor came in for Dowie, who had been tagged with some responsibility for the loss at Starks. Otherwise the Pars were unchanged – Smith in goals, Woods, McGregor, Keddie and McCann across the back, Willis, Mason, Phinn and Graham across the middle, and Kirk and McDougall up front. Burke managed an appearance on the bench, alongside Dowie and Clarke, Thomson as one of the two requisite under-21 players, and Allison. There was no sign of Cardle, but we got a glimpse of Gibson and White limbering up pre-match.

As for Montrose – they had the familiar faces of player-manager Steven Tweed playing centre-back and veteran Paul Tosh leading the line. Older Pars fans may have recognised Ray Farningham as assistant manager.

The Pars kicked off defending the open terracing where some of their fans were gathered. The plastic pitch had passed an early inspection although there was still a fair bit of moisture in the patch in front of the main stand, where the ball would skid. A circumspect first 10 minutes ensued, with the Pars happy to be patient, before the visitors started to get on top. First Willis seemed surprised when a McCann cross found its way to him at the back-post, fluffing his chance, before the Pars forced a string of corners, all of which Willis took. From one of these McGregor had a great chance to score his first Pars goal, but miscued his header and it struck the base of the post.

If that was close, then the Pars should have broken the deadlock midway through the half. A Kirk snap-shot crashed off the junction of post and bar and McDougall hit the rebound tamely at keeper Wood.


The game needed a goal, and remarkably it came for Montrose. McCord had started brightly on the right flank and had a pop from 35 yards, forcing Smith into his first save, and an easy one at that. Two minutes later possession was conceded by Graham, Nicky Smith quickly fed Tosh before Keddie could get back, and the former Raith Rover struck the ball past Chris Smith just inside the left hand post. 1-0 Montrose.


The Pars didn’t demonstrate any immediate urgency to get the equaliser, reasoning perhaps that if they carried on playing the way they had been, then chances would come. Chances did come, although of the half and quarter variety – a long range Mason effort that was always rising, and an attempted Graham flick that he got too much toe on, and which went well wide. Instead it was Montrose who had the best chance, when Pope eluded the off-side trap from a free kick, but volleyed wide when he should have done better. With no stoppage time to be played, the Pars trailed at the break.

The Pars started the second period on top - Graham found some space in 48 minutes, cut onto his right and sent in a cross to the back-post where Mason got forward, but could only find the side net. Then first McDougall then Graham managed to beat their man and get along the bye-line, but neither could find a Pars player with the cut-back. This had been the story of the game to date – lots of possession in the wide areas, no-one getting on the end of the cross.

However, it did look as if the equaliser were inevitable – Phinn’s diving header was blocked, Keddie drove the loose ball narrowly over and then Graham finally forced Wood into making an actual save when he dribbled past several players, but his final shot lacked power.