Maybe we all should! We could learn something. Steve Clarke is gradually reviving Scotland`s fortunes but it will be a while till we can emulate the success of Iceland.
Iceland has a population of 362,000,the same as Fife.

5 years ago they were ranked 133rd in the World but not today, after their programme, which began in 2002, came to fruition.

Iceland has 7 full sized heated indoor pitches Scotland has 4 including Oriam. In Iceland schools are Community High Schools as in the rest of Scandinavia. Every pupil must take three sports sessions a week and it is not so easy to dodge PE as it is here.

Every child is assigned a UEFA Coach at age 4 and football is played according to ability and not age. If you are no good at a sport you still get to play it. Boys and Girls play in the same team to age 16. 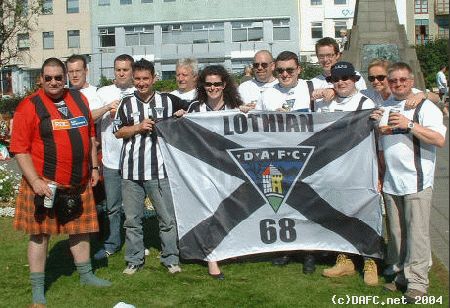 In addition to the state of the art indoor pitches, Iceland has 23 outside pitches and more than 200 artificial ones. 10% of the population are registered footballers. Small towns have a swimming pool, golf course and basketball court too.

The Community element is paramount and friendships are encouraged. The skills developed in PE seem to transfer to academic attainment too. The investment in facilities and training bore fruit in recent European championships and the World Cup.

How many Scots ordered an Icelandic top after they beat England in 2016?
How many learned the Icelandic chant?

Not one of their first X1 plays football in Iceland.

Of course, to emulate this we must start at the grass roots and the plans unveiled by former Footballer and Politician Henry McLeish offered much in 2010. Project Brave advocated the setting up of elite, progressive and performance categories.

Today, though, the only regional academy is the Fife one as McLeish bemoans and which Ross, at Supporters` Council meetings, has left us in no doubt is due to the input from Dunfermline Athletic.

Livingston and Falkirk withdrew with both highlighting the unsustainable losses. McLeish welcomed the fact that all the Divisions came together in 2013 in the SPFL but pointed out that there should be a top tier of 16; the 11-1 voting was for the benefit of the Old Firm; that the clubs` income distribution is inequitable and indefensible. He fears the big clubs have derailed and hijacked his blueprint. He also pointed out that the SFA has neither the authority nor adequate finance.

We know the answers. We need more Oriams.

The setting up of Community High Schools. (There is talk of Rosyth or Inverkeithing getting one.) We need not just more investment and training but a different culture and mentality.

However, Scottish Football will never progress when the whole edifice is structured for the benefit of two clubs.