A hard fought game finished 1-1 after normal time before the Dunfermline fans triumphed 3-2 on Penalties. Parscelona were crowned IFA Fife Cup champions on the XL Turf on Sunday at East End Park after the match ended in a well-fought 1-1 draw with both sets of keepers (and some awful shooting!) keeping the scores down.

A younger and admittedly fitter Rovers team started the brightest but Parscelona were creating the better opening in a tight first 25minutes. The Rovers broke the dead lock on the half hour mark after a sustained period of pressure resulting in several corners.

Parscelona also missed a penalty and rovers had a `contested` offside goal chopped off when the linesman correctly noticed that the keeper was well off his line and there weren`t two players to play the rovers striker onside.

Finally Parscelona inability to clear their lines cost them when Rovers forward Mark Downie forced the ball home from close range. 5 minutes later though Parscelona were back level when a Grant Macleod free kick from just outside the box was deflected in off the post (Macleod who is definitely claiming it for himself!)

The second half was just as tight as the first with both defences coping well with lively forward play and it was no real surprise when the game went to penalties.

Parscelona missed there first 2 penalties with special mention going to Keith Mackie who almost cleared the Norrie McCathie stand with his effort. Parscelona then held their nerve in the shootout to win 3-2 with some magnificent saves from Parsca goalkeeper and man of the match Mark Falconer after losing the initiative with the first two of Parscelona`s kicks being saved and missed. Rovers also missed their second kick but scored their third while Grant C and Fraz A had converted theirs. Mark then saved rovers fourth to leave it balanced 2-2 with one kick each left. Fraz C converted for Parsclona and then Mark saved again to bring the trophy to West Fife...


After the game in Legends the trophy was presented to a delighted captain Grant Macleod by John Yorkston and Jimmy Calderwood. 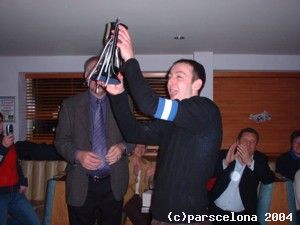 The Parscelona manager Johnnie was quoted after the match as saying; “Was proud of the players today for the effort and nerve they showed. Being manager of Parscelona can be a very painful experience most of the time but this makes it all worth while” 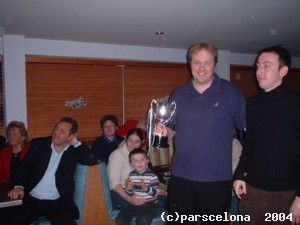 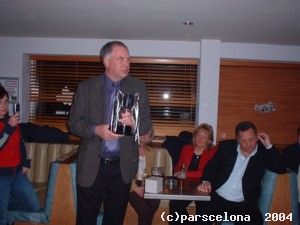 Jimmy Calderwood and
John Yorkston about to
present the trophy.