It was an experienced Pars line-up which took the field defending the North end in front of the approximately 800 strong travelling support; as expected they adopted the flexible 4-5-1/4-3-3 set-up. Paul Gallacher kept the roll-neck jersey, as Bob Crampsey would have put it, Greg Shields started at right back, the two Scotts, Thomson and captain Wilson occupied the central berths and new signing Austin McCann was on the left. The middle 3 comprised Glass, Phinn and Burke with Harper wide right and Williamson wide left. Graham Bayne was the lone target man up front.

After a promising start from the Pars it was Thistle who nearly took the lead in 16 minutes from a corner, Maxwell’s powerful header being headed off the line by Nick Phinn. The Pars won a corner themselves 6 minutes later after an Iain Williamson effort was blocked but Glass’s deep cross eluded the all the men in black and white shirts. The next corner was better with Williamson getting his head on a near post ball but his effort was too high. In between these efforts Phinn had a great chance but shot too close to keeper Tuffey.

Pars support on opening game of the season.

The Partick No. 1 was similarly untroubled when Williamson and Bayne got in each other’s way trying to meet a Harper cross at the back stick , with the youngster’s effort looping tamely into the keeper’s arms.

Gallacher was also to show good instincts diving low to clutch a net bound effort from Harkins just before the half-hour mark, but there was a scare a minute later when Chaplain lobbed over the bar following a moment of indecision between Thomson and his keeper. 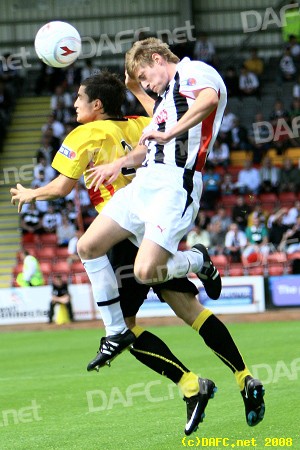 Greg Shields was next to the rescue, hooking a Roberts chip off the line after 33 minutes, before getting a lecture from referee Somers seconds later after giving away a free kick on the edge of the box . The wall stood firm and Paton blasted the rebound over the bar.

There was some good natured booing from the Fife fans as former Par Simon Donnelly replaced Mark Brown in the 36th minute. 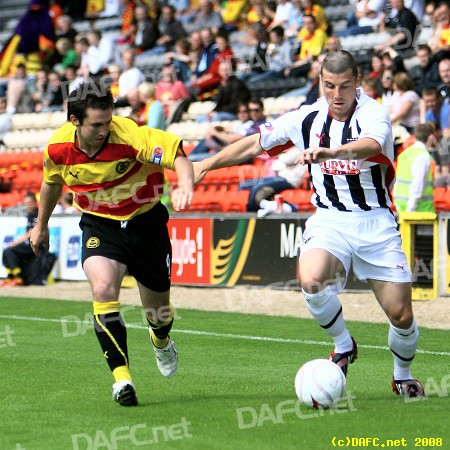 Two minutes later the visitors had a great chance - Harper’s cross to the back post seemed too deep but leaning back Bayne managed to direct a header into the path of Williamson whose flick struck the post and was cleared.

Glass had the next chance with a free-kick from distance but having bent the ball over the wall, it was too central to give Tuffey any difficulty. 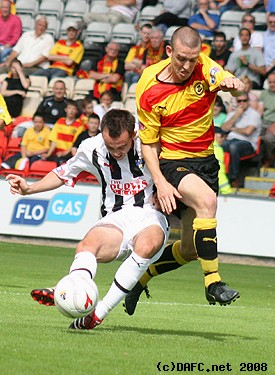 Simon Donnelly nearly answered his detractors in the best possible style with the last touch off the half as he did well to meet Gray’s cross, but his header flashed past the post. Thistle started the second period brightly, and there was another penalty scare when the ball appeared to strike Wilson’s arm in the box after 53 minutes. Shortly after the ball bagatelled around the Pars box with Thistle unable to force it over the line.

Glass, who was tending to sit back allowing Phinn licence to get forward, managed to give his pressured defence a breather after the hour mark with a surging run, which Rowson stopped illegally. Somers blew a touch too quickly as the ball had fallen to Bayne, neither did he allow the free-kick to be taken quickly although to be fair he was consistent with such rulings throughout. Maxwell was the first name in the book for persistent fouling in 62 minutes.