Two first half goals from Erskine and Doolan had Thistle in the driving seat at half-time, and despite ample second-half possession, the Pars couldn’t find a way of breaking through the Jags’ defence.


Partick were on a long unbeaten run as the PA kept reminding us, and several players had signed new contracts (ditto), so they had a fairly settled side on display. There was no MacNamara or Donnelly, and now no Buchanan either as following his transfer he was getting his first Pars start at his old stomping ground, partnering Andy Kirk in attack as McDougall and Clarke were on the bench. Gibson and Graham were the wide men, and Phinn started alongside Mason in the middle. Rumours of McGregor’s plummet down the club’s centre-back rankings seemed to be confirmed when Dowie came back in at number 5 beside Keddie, with Higgins on the bench at back-up. Chris Smith, unavailable for the trip to Pittodrie, kept the keeper’s jersey, with Kyle Allison not being given the opportunity to get used to his defence or do something silly let get himself red-carded. McCann and Woods were the full-backs with Ryan Thomson making up the sixteen.

After Thistle had kicked off, the game took its time to get going. Buchanan got an early touch, his flick sending Graham clear, but the latter was too firm with his control and Fox in the Thistle goal was quickly out to gather. Graham had another chance to run down the left when Smith made a good take from a cross in 6 minutes and set him off with a quick throw, but Boyle and Kinniburgh thwarted his attempts to advance. However, this early promise soon evaporated as the Pars struggled with control and cohesion on the difficult surface. The home side too weren’t playing pretty football, although with the game littered with free-kicks in the early stages they didn’t get much chance.


However things changed in 14 minutes when the Pars again conceded a simple goal. Possession was given away cheaply on the right and a pass through the defence found Erskine in so much space that he looked off-side; as the defence appealed in vain to the linesman Erskine stuck the ball underneath the advancing Smith. 1-0 Thistle.


Another Buchanan flick sent Kirk clear, but he ran into Kinniburgh before there was another scare from the long ball over the top. Keddie looked like he was struggling to deal with Erskine but Smith was alert to the situation, coming out of his box to intercept and coolly pass to a team-mate.

There was little action at the other end, and it took until midway through the first half before the Pars had any effort at all in the vague direction of the Partick goal, Kirk getting a head on a Gibson cross, but he was too far out, not to say off-target, to cause Fox any concern. Woods had a better effort cutting inside on the half-hour to unleash a left footed drive that was always rising shortly before Smith had to make an actual save when Doolan had space for a shot from the edge of the box. The Pars finally worked the keeper from a free-kick 25 yards out in 37 minutes, but although Gibson’s drive through the wall took a slight deflection Fox held comfortably.

Three minutes from the break Partick doubled their lead. More slackness in the Dunfermline defence allowed Flannigan space behind on the Thistle right and although Smith did well to save the initial cross-shot the ball was only diverted as far as Doolan who had all the time in the world to tap home into the unguarded net from 6 yards. 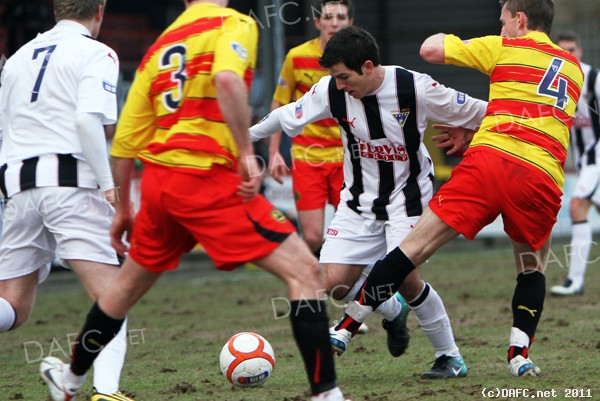 The Pars certainly needed to make changes, and Phinn was the first one to give way, not reappearing after the interval, with Thomson coming on to add a little bit of height. However, it was Thistle who threatened first, with Flannigan twice testing Smith early on, once to his left and once to his right.