Two goals just after the break were enough to ensure the Pars progression into the next round. A Nick Phinn slotted home following a rebound from a Graham Bayne shot seconds after the re-start and a sublime strike just 4 minutes later from new signing Andy Kirk provided the goals. There were chances aplenty for both sides in an entertaining game at the Balmoor Stadium, but in the end the Pars superior fitness saw them progress through. Peterhead were as tough as expected and I expect great things from them this season.

Just one change from the team that started against Pertick Thistle on Saturday. Iain Williamson swapped places with new-signing and former Jambo Andy Kirk. Peterhead kicked of the game in front of a good crowd with many Pars fans surrounding the pitch on the perimeter of the pitch. The home fans were encased in the two stands of the ground. No segregation here, but the locals were very friendly and the game was conducted in a good mood throughout. Not even a Rock Steady steward in sight, and nobody getting scolded for daring to stand up during a game of football - ah, the good old days...how I miss them so much... 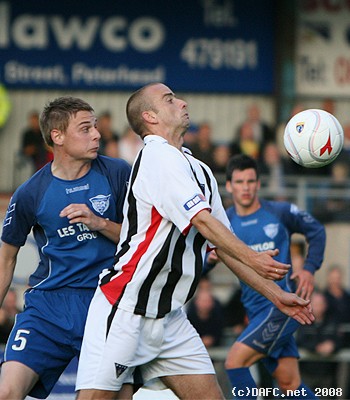 Bayne holds the ball up

The hosts kicked off towards the harbour goal wearing an all blue strip. Pars were playing in the home strip with white shorts and socks. First chance of the game fell to the Pars with a corner on the 6th minute. New signing Andy Kirk on target but saved by Peterhead goalkeeper Mikel Kula. A minute later Nick Phinn received the ball on the edge of the box and with time and space to have a shot opted instead to chip a low ball into the box, but with no-one running onto it the ball rolled harmlessly out for a goal kick.

11 minutes saw some really good passing play between the midfield that is actually playing as a unit as opposed to 4 individuals. Harper brought the ball forward on the right flank at the right time following good patient passing between the middle four and sent in a decent ball to the head of Bayne but the former Inverness Caley Thistle forward could only direct it upwards and Kula gathered. Good play to watch.

You could see the pairing of Bayne and Kirk is going to take a little time to adapt and perhaps Bayne needs to be a little more selfish in the box. The ball was played high to Kirk who knocked a decent ball to Bayne, but unfortunately Bayne headed it back to Kirk who was further from goal.

The best chance of the first half fell to the Pars on 22 minutes. Fantastic midfield play from the Pars following Harper winning the ball with a header. He controlled the ball, brought it forward and cut it back to Phinn who was on the edge of the box. Phinn saw there was no opportunity and cut it back to Glass who found a line on target. The keeper could only parry the ball out for a corner as the ball spun outside the post.

Paul Gallagher did well to save following a good strike by Martin Bavidge on 26 with Peterhead breaking forward. 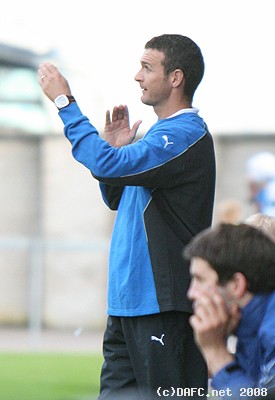 There was a slight chance for the Pars on 36 following a mix up between the Peterhead goalkeeper and defender. The defender tried to head the ball clear as the keeper tried to punch it at the same time. The ball fell to the ground as both could not get enough on the ball together, but there was no Pars player to capitalise.

At the other end Paul Gallagher somehow felt the ball slip through his hands but again no-one there to take advantage.

Pars kicked off the second half – and into the lead! The ball was played back to Shields who played the ball forward up the right flank. Bayne knocked the ball to Kirk who fired in a shot that Kula could only block, but not gather. This time NICK PHINN was in place to force the ball home. 0-1