It having been three weeks since the last game and with Wilson still suspended changes were inevitable, and so the Pars lined up with Gallacher in goals and a back four of Woods, Shields Thomson and McCann. Harper returned to the right wing, with Phinn replacing Burke on the left as Bell and Glass occupied the middle; Kirk and Bayne continued their partnership up front. There was a place on the bench for surprise loan signing Rory Loy, along with Burke, Ross, sub-keeper Reidford and the manager himself. 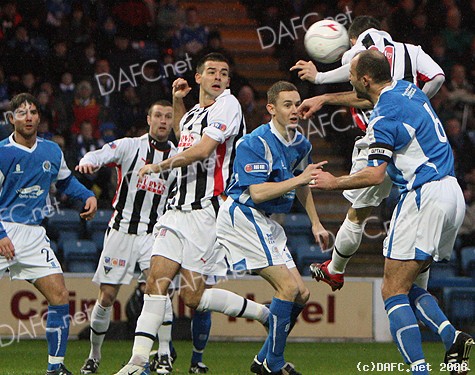 Phinn puts the pars ahead

It didn’t take the Pars long to take the lead when in the fourth minute Woods exchanged passes with Harper on the right before hitting a cross to the back post picking out the rising Phinn. The young mid-fielder’s classical header went in low to the keeper’s left. 1-0 to the Pars

A minute later Phinn was back at his own corner flag winning a goal-kick as the home team sought to hit back, and Shields had to mop up when Gallacher’s clearance from a Thomson pass-back was charged down by Kean.

The visitors nearly doubled their lead in 8 minutes when Bayne nearly finished a move he started when his flick found Harper. Although the winger was tackled as he tried to cut inside, the ball broke to Glass who found the big number 9 with his cross, but the header slipped past the post.

Every touch of Stephen Simmons was being met with a healthy chorus of boos from the Pars faithful, and in 13 minutes, when Woods tried to chest Kean’s cross back to his keeper, the former Par tried to pounce but collided with Gallacher as the ball rebounded for a goal kick. With sub keeper Reidford having been injured in midweek there was concern as Gallacher continued to limp after receiving treatment, although he was able to take the goal-kick. Simmons’ reception got more frosty.


After Calum Woods won a corner with one of his trademark left foot drives following a cut inside, the home side equalised. O’Connor’s header from a cross from the right rebounded to McQuilken 15 yards out and the wing-back had plenty time to steady himself before firing home left-footed. One each.

The Pars should have retaken the lead almost immediately, when Kirk found himself one-on-one with he keeper but Cammy Bell saved. Four minutes later Bayne found the outside of the post with a left foot shot from the edge of the box and after 30 minutes the same player should have done much better than shoot tamely at Bell when set up by Kirk.


The Pars had another great chance three minutes from the break when keeper Bell was a tad hesitant when clearing a pass-back. Bayne met the clearance firmly (taking out MacFarlane in the process) and again Kirk had only the keeper to beat. However Bell redeemed himself by rushing to the edge of his box to block ,and although the ball broke back to Kirk he crashed over from the angle.


Queens made a change at half-time, replacing the injured Thomson with Weatherston but it was the Pars who were quickest out of the blocks and again it was a one-on-one with this time Harper providing Steven Bell with the chance to put one over his namesake. The Pars player went for a different approach, opting not to shoot but taking the ball past the keeper instead. However his first touch was a little clumsy and the shooting opportunity evaporated as quickly as it had arisen.

The second half was much more even but misfortune struck the home side in 52 minutes when Burns appeared to catch his foot in the turf after being taken out by Shields, and the former departed on a stretcher. Referee Thomson yellow-carded Shields but delayed the taking of free-kick until substitute Robertson took the field, the replacement not being ready despite the lengthy delay.