“Dunfermline made their extra two men count”. So said the Raith fans behind me on the final whistle – the implication being that the Pars got all the benefit of all the crucial decisions (including Simmons’ yellow cards). Certainly there was refereeing inconsistency, but it’s easy to blame the ref when things aren’t going your way – the Pars deserved to win this one, and will be pleased to get another 3 points from a tricky fixture.


The sight of Steven Bell warming up on Starks Park was unexpected, but a quick count of more eligible players revealed that he, Muirhead and Ross were just having just having a kick around, with Cardle and McGregor coming back into the squad. Burke came into the starting line up in central midfield alongside Holmes and Mason, we had Gibson on the right, Graham on the left and McDougall up front. The back 5 (Fleming, Woods, Dowie, Higgins and McCann) were unchanged. Emergency loan signing David Armstrong made his first appearance of the season at centre-half, with Rovers down to the bare boards in terms of available personnel. 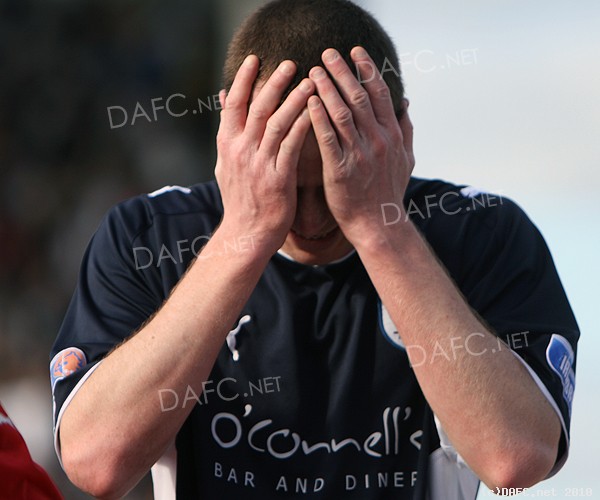 The Pars took the kick-off but it was all Rovers for the first ten minutes, although they failed to trouble Fleming unduly: Shields’ turn and looping shot within 30 seconds only dipped once it was already over the bar, Walker’s execution from a 40 yard free kick did not match his ambition, and Darren Smith’s attempt to catch Fleming out at his near post from another free-kick was also off-target.

Gradually Burke and Mason began to get the ball down and play passes, and although Holmes had to be replaced by Phinn, the Pars came more into things. Graham exchanged passes with McDougall but his placed shot was blocked early. The first real chance should have come after the Pars broke from a Raith corner, but McDougall delayed his pass to Gibson, and the yellow-booted winger couldn’t get past the back-tracking Smith at the corner of the box.

A dull half suddenly burst into life after the half-hour. Burke’s first touch was poor and tempted Simmons into a marginally mistimed tackle, for which he was booked. Two minutes later Simmons went down too easily in the box when challenged by Higgins, referee Scott MacDonald ruled it a dive, and Simmons was left to explain what had happened to kitman Brian Marr as he trudged up the tunnel for an early bath.


Burke hadn’t recovered from the original tackle, and hobbled off with Cardle coming on, the Pars reverting to a more orthodox 4-4-2 with Graham moving alongside McDougall. A combative Phinn won the ball in 36 minutes, fed Graham, but David’s attempted 1-2 with McDougall stopped as a 1 – the return ball never materialising. Cardle cut inside to hit a shot from 25 yards over, but a poor first half ended goal-less. 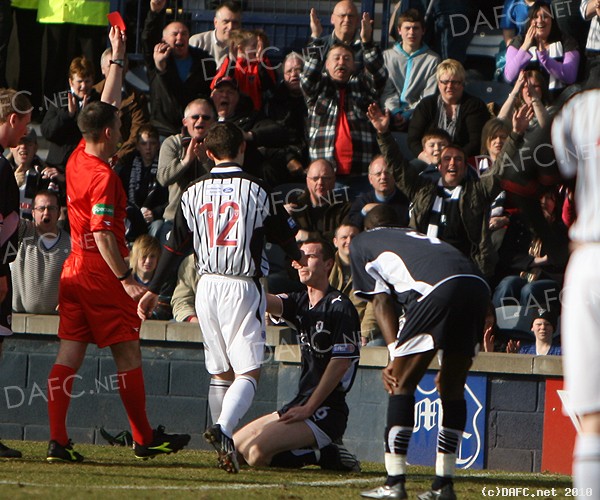 During the interval we saw Rovers legend (and Dunfermline boy) David Sinclair on the pitch to select the winning lottery ticket, and heard The Kaiser Chiefs’ “I predict a riot”. However, the attempts to get the Rovers support going were dampened within 5 minutes of the restart when the Pars took the lead. A long diagonal pass was chased down by Graham, he beat Ellis and advanced into the box. His shot was beaten away, but only as far as Mason who smashed the ball into the back of the net from 12 yards. 1-0 Pars.

The 53rd minute saw one of those passages of play that infuriate one set of supporters: Mason was late on Walker – result: a lecture. Almost immediately Walker was late on Gibson – result: a booking. If Rovers were upset by this, they nearly had more cause to be upset when the Pars set up a move that was nearly a mirror-image of the move that led to the goal. This time Graham beat Armstrong on the left, but Cardle couldn’t connect with the cut-back.

Another period of dominance nearly produced the killer second – Woods got free down the right and from his cross Graham leathered the ball goalwards only for McGurn to make a simply astonishing save, flying high to his left, the sort of save that would earn the epithet of save of the season had not the same player also performed miracles at East End Park back in August.

Smith had a chance just on the hour, when for once Higgins didn’t beat Tadé in the air, and the defence sat off him, but he scooped the ball over the bar. Gibson had a much better chance 3 minutes later – again Graham was the architect, beating Ellis on the right, but Gibson seemed to try to catch McGurn out by hitting the ball early, and off-stride, and the ball dribbled past the post. Or possibly it was those banana-boots to blame.