Raith Rovers again proved more than a match for the league-leading Pars when a fine Tadé strike won them a close encounter. After a goal-less first half, Campbell had the home team in the lead early in the second period, but Phinn soon equalised. Try as they might, the Pars couldn’t find the second equaliser.


It may have been a new year, but it was time for one of the oldest fixtures in the book, with a short trip to Kirkcaldy for yet another local derby. The Pars made one change – Clarke had impressed when he came on against Cowdenbeath and offers a slightly more physical presence, so he started, although it was Kirk who gave way, rather than McDougall. Willis kept his place on the right wing after his fine mid-week performance, with Graham starting on the other flank, and Phinn and Mason were in the middle. After 3 successive clean sheets, the defensive 5 was left unchanged – Smith wearing the gloves with Woods, Dowie, Keddie and McCann in front of him. Kirk started on the bench, alongside Cardle, Thomson, McGregor and Allison.

Raith Rovers kept the same team as that which drew at the Bairnabeu – a 4-4-2 with the impressive Campbell, now happily recovered from his serious car crash, anchoring the defence, Davidson as the holding player, Walker making play and the muscular Tadé and the nippy Baird offering the goal threat. As well as Iain Williamson and Scott McBride, who started in midfield, there was plenty of Pars interest on the bench with Craig Wilson and Stephen Simmons listed amongst the substitutes.

Rovers, in their navy blue strips, kicked off playing towards the Pars fans packed into the Val McDermid stand, but it was the visitors who seemed to settle first. An early break saw McDougall burst through the middle to find Clarke, but Clarke took a touch which gave a chance for the defence to block his shot. A minute later and Phinn was through down the right, but he seemed to go for goal from a very tight angle, when Graham was free at the back post.

The Pars continued to have the edge when Walker was booked for a late tackle on Phinn, having got away with something similar a minute earlier. Willis then broke quickly, ghosting past 3 defenders, but had to settle for a corner, which he took himself, picking out Keddie at the back post, but the centre back had jumped illegally and was penalised by Charlie Richmond.

The first shot on target didn’t arrive until the 25th minute, when Baird had a pop from 25 yards, but Smith caught comfortably. Meanwhile Clarke had a dig from similar distance, but didn’t even trouble McGurn.

It was pretty scrappy fare, neither side being able to string any passes together, but Baird had a great chance in 40 minutes. After a delay whilst Davidson needed treatment, the Pars defence seemed to switch off, but Baird, who probably had more time than he realised, scuffed his shot past the far post.

Jim McIntyre was sitting in the Directors’ box due to his touchline ban, and his exhortations could clearly be heard in the stand. One feared for his voice when the McCann took an age over a throw in right in front of his manager, with no Pars player showing for the ball, and conceded possession cheaply. McBride was away, McCann tried to trip him, missed, continued tracking back, then got the saving tackle in. Mason, however, was correctly penalised for a lunge at Davidson that had the Raith player banging the turf in seeming agony, and the Raith fans baying for a red card. Charlie Richmond deemed a yellow card an adequate punishment, a decision justified by Davidson’s speedy recovery.

There were no changes at the break, but the home team started much faster than they had in the first half. There was panic in the Pars defence when Keddie got underneath the ball and headed backwards and this was only partially alleviated when McCann hooked clear – McBride had an air-shot before Walker drilled past Smith’s right-hand upright. Walker had another chance a minute later, but was crowded out before he could shoot.

Raith did take the lead in 51 minutes – McCann had to concede a corner on the left. Williamson took the kick and Campbell got away from Dowie to side-foot home from 6 yards. 1-0 Rovers. 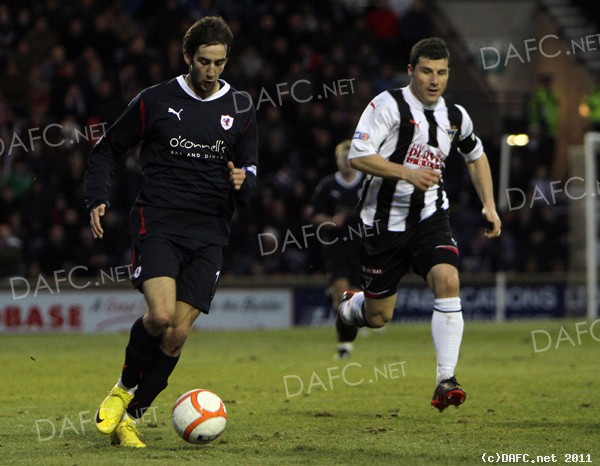 How would the Pars react to this reverse? Quickly, as it happened. Within 3 minutes. Graham had cut inside, and although his effort was cleared, Woods swung it back in left-footed, for once the Rovers defence didn’t deal with it and Phinn buried the ball in the top left hand corner. One apiece.