The Pars made one forced change to the team that had come from behind against Queen of the South: as predicted Calum Woods replaced Nipper Thomson with the young Liverpudlian playing right back and Greg Shields moving to centre-back. Similarly St Johnstone varied only with Liam Craig replacing Martin Hardie as both sides adopted 4-4-2 formations.

The visitors came roaring out of the blocks, forcing 2 corners inside the first 30 seconds, although their first chance took 4 minutes to arrive when Harper shot past the post following Phinn gaining possession with a fine challenge. Harper, who had been an injury doubt before kick off, appeared a minute later in defensive mode to snuff out a Saints attack with a casual header back to keeper Gallacher, before causing problems at the other end again with a cross across the face of goal that found no takers.


The Pars had the greater share of possession with Kirk swivelling and shooting just past following a pass into the area from McCann, but were failing to create any clear chances with the final ball often poor - Burke being the biggest culprit.

At the other end Wilson gave Woods a mild reprimand as the latter’s flick inside to the former rebounded off Holmes for a goal-kick, when a blooter upfield might have been more to the skipper’s liking; and in 22 minutes referee Allan blew for handball in the Pars box - but against Holmes.


Midway through the half the Pars were compelled into a substitution with Iain Williamson replacing Kevin Harper on the right side of midfield. Immediately after there was nearly a flare up when Bayne had the ball trapped between his legs on the ground, but the referee was quick to restore order with handshakes ordered all round.

The home team were coming more into things, McCann conceding a corner with a wayward headed backpass, and then Gallacher had to smother a loose ball when Shields’ clearance rebounded off Wilson in the danger area.


A Kirk flick following a quickly taking throw in near the corner flag was a rare Pars chance, before Gallacher was again to the fore, firstly making a flying punch to clear, clattering into McCann in the process, then making the only real save of the half when clutching a header as Craig beat everyone in the air.

Wilson saw yellow when the ball reared up as he was about to pass back to the keeper from the half-way line and he took down Milne as the latter stole possession. Despite suggestions from the home support that red would be more appropriate Mr Allan was aware that Shields was providing ample cover. 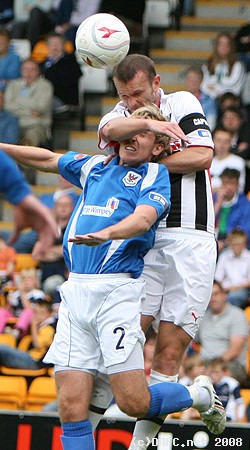 Just as the half was drawing to a goal-less conclusion the Pars took the lead - in 43 minutes a poor clearance from James was picked up by Phinn and following interplay with Williamson the substitute scored his second of the season - not with the most convincing of shots - but they all count.

Irvine picked up a booking for dissent and the Pars had a half time lead, well deserved on the balance of play.

Derek McInnes made two changes at the break, Jackson and Samuel replacing Swankie and Holmes as he made an early move to a 4-3-3 formation.

The Pars had a great chance to make it two when Euan McLean flapped at a cross and the ball fell to Williamson but the youngster’s shot from 12 yards was cleared off the line by Rutkiewicz. Perhaps inspired by this let-off, Collin Samuel had a couple of near things, but not on target.