Thistle Grass on Pars to SFA

Thistle will take their complaints about the pitch at East End Park to the SFA. Gerry Collins and a number of players have spoken out over the "XL-Turf" which is part of a Uefa Experiment.

Thistle chief executive, Alan Dick said: "We are writing to both the SFA and the SPL expressing our feelings in the strongest terms.

"The highest league in the country should, after all, make sure we have fairness above anything else and that is not the case so long as this artificial surface is in place."

Dick, one of the most experienced and respected administrators in the game, continued: "We will also have to sit down and come to a decision on whether or not we go back to Dunfermline later in the season if that surface is
still there.

"The plastic pitch at East End Park should be taken away straight away and replaced by a grass pitch - then every club in the league would be playing on the same surface again."

Collins has admitted that despite the pitch he thought Dunfermline deserved to win so this is not sour grapes on Thistle`s after Gerry Collins blasted the pitch at the weekend.

But Dick confirmed today: "We did not so much criticise the surface as the fact that Premier Division football was being played on a surface alien to visiting teams.

"We are still feeling aggrieved and now we intend writing to the SFA and SPL expressing our feelings - this is something that has to be acted on officially and not just through the columns of the press."

Thistle trained on the pitch only once, on Thursday as is part of the deal with the pitch,But Dick claimed: "By the latter part of the season Dunfermline will have a huge advantage.

"Even now, players don`t know what footwear to use.

"Our hamper man had an extra burden at the weekend as every player was provided with about four different types of footwear, but was still not sure which was most suitable to put on.

"They also spent as much time on the deck as they did standing up."

Dick went along with manager Collins` view that the artificial pitch was "great for training or for bringing on young players."

He insisted: "It is not acceptable for games in the SPL.

"Players were slipping and sliding all over the place, yet points that could count for a place in Europe or avoiding relegation are being decided on it."

Craig Brewster hit back at Collins` remarks by claiming The pitch at Firhill is "probably one of the worst surfaces in Scotland, certainly in the Premier League."

However, Dick said today: "Brewster came back from playing in Greece to join Hibs two years ago, when we were not in the SPL.

"He has played for Dunfermline only once at Firhill, so I regard his comments as outrageous and ill-judged." 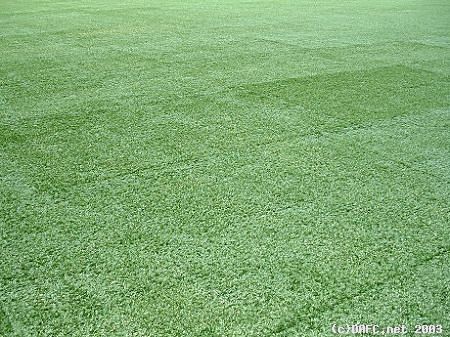 A close up of the new `grass`.

It seems that Gerry Collins opinions are even further away than UEFA`s.

From the Official site:

This makes the DAFC the only club involved in the pilot project to have achieved the UEFA accreditation on site. Although UEFA does not require the onsite tests to be conducted until three months post installation, it was a requirement for the Scottish Premier League and DAFC to carry out the tests in order to approve match play.

CLick on the link below for the full story.

Brewster against Cowdenbeath
on new surface